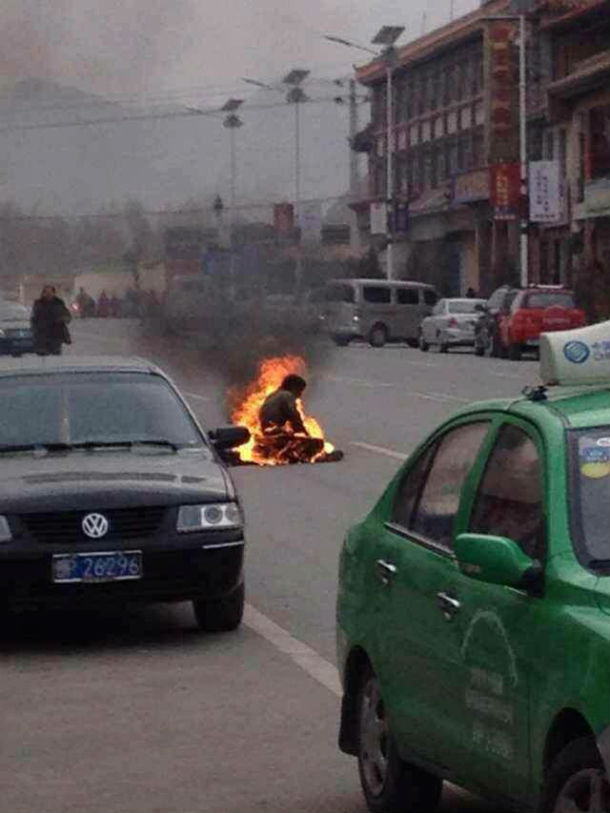 Dharamshala: - A Tibetan man burned himself to death in Labrang county of Amdho region in Tibet to protests against Beijing's hardline and repressive policies on Tibet.

There are emerging reports of one more Tibetan self-immolation on Sunday, February 17. "Namlha Tsering, a 49-year old Tibetan man has set himself on fire in protest against the Chinese government in Sangchu (Ch: Xiahe), Labrang county, eastern Tibet around 5.20pm (local time)," local sources inside the region told The Tibet Post International (TPI).

Local Tibetan sources stated that he might not survived from the injuries he sustained. Some images show flames blazing from his lower body as he stays between cars on the main street of Labrang where looks busy with traffic. but, it is unclear whether he is still alive.

His current whereabouts and condition is unavailable. Although the situation became very tense in Labrang county after massive protests occurred recent years. The sources said the Chinese police and paramilitary personals immediately arrived at the immolation protest site and took away his body.

"The Chinese authorities have immediately cleaned the site minutes after the incident, that has a chance of showing normal situation, letting the vehicles go on and pretending there is no any incident happened at all," the sources told TPI.

The latest incident has pushed the total number of self-immolation in Tibet to 102, including three within this month alone, 85 of them have been confirmed dead from their severe burn injuries.

Many of them carried out self-immolation protests in populated towns and cities, which is far away from their villages, where they hoped to get a better world attention to the issue of Tibet.

"The reason lies in China's massive policy failure in Tibet over the course of more than 60 years of its rule. The revolution that is brewing in Tibet is driven by political repression, cultural assimilation, social discrimination, economic marginalisation and environmental destruction," the Tibetan administration stated in the recent released White Paper on Self-Immolations.