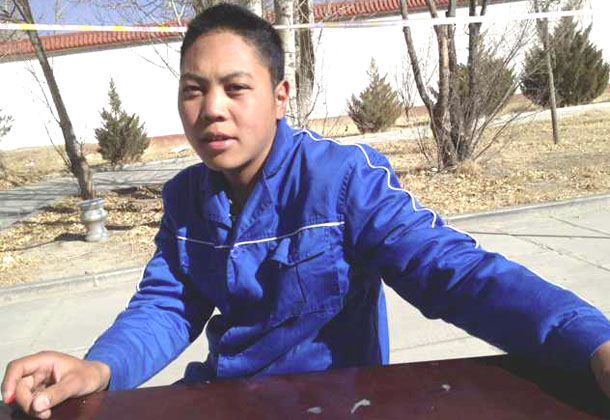 Dharamshala: - Stepping up its severely crackdown against Tibetan protests in Tibet, a student of of the Tibetan traditional Thangka art has been sentenced to two years in prison in Lhasa, the capital of Tibet for allegedly having Tibet related photos on his mobile phone.

According to exile sources, Ngawang Topden, a 20-year-old Tibetan man from Tritso village of Khargang township, Jomdha county in Kham region of eastern Tibet is serving jail sentence in Lhasa, the capital of Tibet after was sentenced by a Chinese court. Ngawang's family members and relatives know that he has been sentenced but they have still not been informed of the prison term and his well being.

Sources in the exile confirmed to the The Tibet Post International (TPI) that he was "detained on October 21, 2012, near the Mosque in Lhasa by Chinese security personnel on charges of having stored pictures of the Tibetan self-immolators, a national flag of Tibet and other photographs showing the inhumane treatment of Tibetans living under Chinese rule, on his mobile phone."

"Before his sentencing, he had been held at a detention center in Lhasa for three days and later one week in Gutsa Detention center for questioning," Yeshe Gyaltsen living in exile told TPI. Ngawang is currently serving his sentence in a prison, near Tolung Shongpa Lhachu, Lhasa, Central Tibet.

He was sentenced after imposing the severe restrictions on the movement of the Tibetans in Lhasa, just before the ruling Communist party held a leadership transition.

Ngawang was "convicted of allegedly encouraging other Tibetans to sabotage ethnic unity and misinforming about political issues. Ngawang among many other Tibetan political prisoners, particularly from Nagchu county are serving different jail-terms in expressing their sufferings under the Chinese repression," Gyaltsen said, citing eyewitnesses.

However details of the trial are not known, including the precise charges, the date of the sentencing and whether or not due legal process was carried out.

Tibetans are forced to denounce their beloved spiritual leader, His Holiness the Dalai Lama, and his photographs are banned. Arbitrary arrest, imprisonment and torture are common occurrences daily in almost all parts of Tibet for maintaining loyalty with their religion and culture identity.