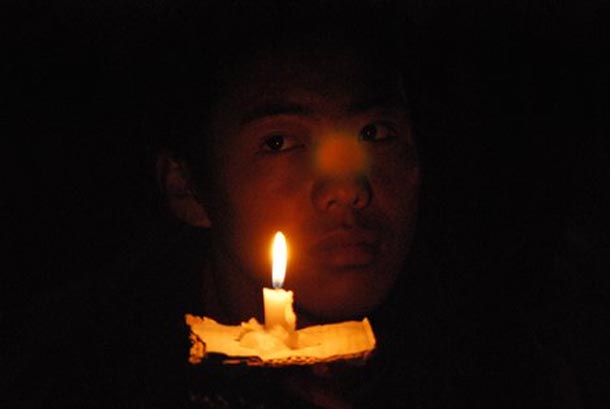 Dharamshala: - Amid a wave of self-immolations which have fanned across Eastern Tibet, February 24th witnessed the 105th reported case of a Tibetan burning themselves in protest. News has emerged of a young monk named Phakmo Dhondhup to have self-immolated in Amdho province of Eastern Tibet, at around 8pm.

Very few details have emerged of the act, which reportedly took place within the vicinity of Jakyung Monastery – the institution where Phakmo was registered as a monk. It appears that he was between 20-22; though it it not yet known if he made a statement beforehand.

Following the self-immolation, the monks of Jakyung monastery took him to a local hospital; whereupon a large number of Chinese police arrived. His condition is unknown, and it is still not yet clear whether he is dead or alive.

It is apparent that Phakmo is originally from (upper) Sakar village of Tsaphuk township (Bhayan county), a community which is itself near Jakyung monastery.The monastery itself is among one of the biggest Gelukpa Tibetan Buddhist monasteries in Amdho region.

Eastern Tibet; particularly Amdho region, has witnessed the majority of self-immolations by Tibetans since 2009. An estimated 105 have taken to the form of protest; the majority of which express a need for human rights, dissent at Chinese rule, and most commonly – a return to Tibet by His Holiness the Dalai Lama, who currently resides in India as the exiled spiritual leader of the Tibetan people.

February 24th marked the 9th day of the Tibetan calendar; the year of the Water Snake. Since the new year began (losar), six Tibetans have have reported to have burned themselves in protest. Amid escalating crackdowns both within Tibetan and exile communities subject to protests, it appears that further news of this latest self-immolation will be hindered by media blackouts imposed by Chinese authorities in the region.