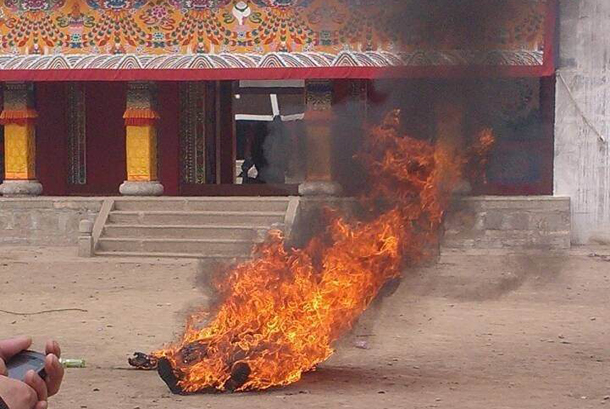 Dharamsala: February 25th 2013, Reports have emerged from eastern Tibetan that a young man named Tsezung Kyab self immolated within the grounds of a monastery at approximately 1.30 pm locally.

Images taken at the scene, as well as witness statements, highlight that the 27 year old self-immolated in front of Shitsang Monastery (Shedup  Choekhorling) in the courtyard of the temple complex.

His immolation, which is the 106th to occur since 2009, co-incises with the auspicious day of Chotrul Monlam Chenmo, and involves images of the Jetsun Jampa being taken around the monastery (Sanskrit: Maitreya Buddha), marking the 15th lunar day of the Tibetan calendar.

It is believed that Tsezung Kyab is originally from Choekhor village of Lhuchu county of Amdo region. It is also apparent that he is the cousin of Pema Dorjee, who also self-immolated, on December 8th 2012.

As Tsezung self-immolated, it is reported that Chinese police present at the prayers attempted to to extinguish the flames. However, as Tsezung was already alight, Tibetans prevented the police from further intervention. He died at the scene.

Following the immolation, the body of the young 27 year old was taken to his village of Choekhor. His self immolation marks the Lhuchu county, and 4th in Shitsang area since 2009.

Traditionally during Chotrul Monalam Chenmo Tibetans create butter lamps of  auspicious symbols, as well as elaborate displays in public spaces. The lanterns are lit in celebration on the fifteenth day of the month. The self-immolation of Tseyung occurred during the observations of Shitsang monastery – just one and a half months after that of his cousin Pema.