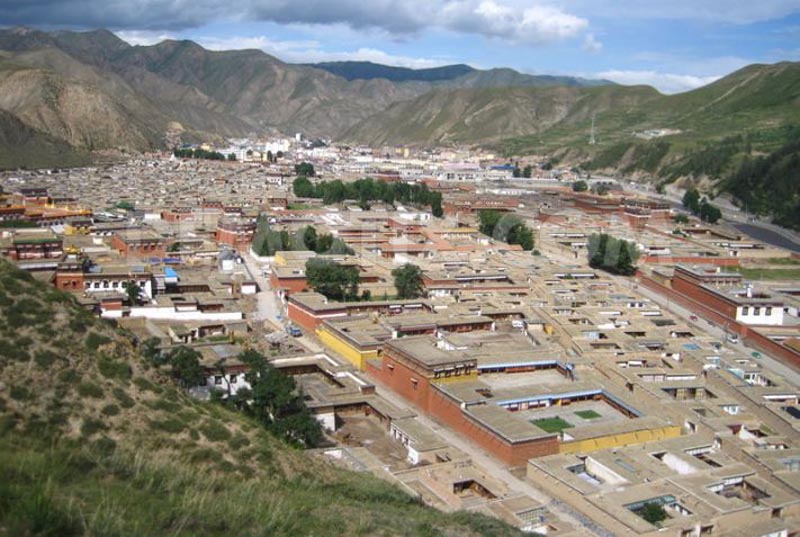 Dharamshala: - Chinese authorities in Gansu Province last year issued an order to expel monks who had come from Tibetan areas outside Gansu to pursue their religious studies in monasteries (including the famed Labrang Tashikyil Monastery) located in the province.

This was revealed by Samten Jigme (name changed), a former Labrang monk, in his testimony to TCHRD. Samten Jigme fled Tibet and arrived in India this month.

Samten Jigme said there are about 1,300 monks at Labrang Monastery but the number may be reduced to 999, which is the limit set by Chinese authorities. The monastery is not allowed to exceed its total monk population beyond 1,000.

So far, the expulsion order has not been implemented in full at Labrang as the monastery's abbot, a member of the Buddhist Association of China (BAC), had repeatedly petitioned Chinese government. (BAC is a party body that controls and manages Buddhism in People's Republic of China.) Even otherwise, implementing this order has created a number of practical hurdles. Many senior monks at Labrang such as geshes, scripture teachers, disciplinarians, etc., hail from areas outside Gansu. Their expulsion would directly affect the normal functioning of the monastery particularly Buddhist learning and scholarship, leaving monks without teachers. Beginning this year, these senior monks have been ordered to apply for residential permits (Tib: themtho) to continue living and working at Labrang.

However, this option is not available to other ordinary monks at Labrang who are likely to be expelled soon.

Moreover, there are 270 monks who have waited for the past three-four years to sit for entrance exams that would decide their admission into Labrang. Chinese authorities have still not granted them permission to sit for the exams. There is little doubt that the authorities are purposely postponing the entrance exams.

Labrang Monastery is a popular choice for many Tibetan monks as a seat of higher Buddhist learning. The monastery has attracted monks from all over the Tibetan plateau. In recent years, requests for enrolment at Labrang have grown following widespread expulsion drives carried out in the larger monasteries in Lhasa (TAR) and other monasteries in Tibetan areas outside TAR.

In the aftermath of the 2008 protests in Tibet, Chinese authorities in Lhasa issued a similar order that led to severe crackdown and expulsion of monks in major monasteries located in the Tibetan capital Lhasa. Monks hailing from Tibetan areas outside Tibet Autonomous Region (TAR) were expelled or returned to their home villages.

At Kumbum Monastery in Qinghai Province, another historic monastery in the Tibetan province of Amdo, there are about 700 monks with a relatively lenient admission process. But unrestricted commercialization of Kumbum for quick tourist cash has further affected the standards of religious education, thus driving many serious monks to seek admission in neighboring Labrang. Kumbum Monastery has now become a top tourist destination in Qinghai after Chinese government spent millions to beautify its physical structures for tourist consumption, but Kumbum's beautification has failed to attract serious Dharma students.

In turn, Chinese government has begun striking the whip on Labrang, restricting monks to their domicile provinces, or in this case, monks from Qinghai studying in Gansu face imminent expulsion.

Samten Jigme further said that the frequency and severity of political education classes at Labrang have increased in recent months, with classes being held two to three times a month. Usually, 'work team committee' members come to monastery to run the classes. However, after facing stiff opposition and non-cooperation from the monks, Chinese authorities have devised another strategy. Nowadays, they are forcing the monastery's senior monks and staff to give political education to the monks. The strategy of using senior monks to politically indoctrinate younger monks is now being applied in many other areas in Tibet. For instance, in January this year, a group 30 senior Tibetan monks from major monasteries in TAR were taken to Nagchu Prefecture by TAR branch of BAC to give political education in the guise of 'religious teachings' in monasteries such as Bekar Monastery in Diru (Ch: Biru) County in Nagchu, TAR.

Recalling a somewhat apologetic speech given by Labrang's abbot in 2009, Samten Jigme said the abbot told a gathering of the monks that his sincere wish to save Labrang from meeting the fate of many other major monasteries forced him to do Chinese government's bidding. Many major Tibetan monasteries such as Sera, Drepung and Gaden in Lhasa and Kirti Monastery in Ngaba continue to suffer frequent crackdowns resulting in disruption of normal religious classes and increased cases of detentions, disappearances, torture and imprisonment.

The abbot was referring to the distribution of anti-Dalai Lama propaganda literature (in which he took active part, albeit involuntarily) by Chinese authorities at Labrang following the 2008 protest. The propaganda literature blamed the Dalai Lama and the "Dalai clique' for causing the 2008 protest. The involvement of the monastery;s abbot in running the anti-Dalai Lama campaign had alienated and hurt the sentiments of many monks, and at the time, some Tibetan writers had openly expressed their opposition through their writings.