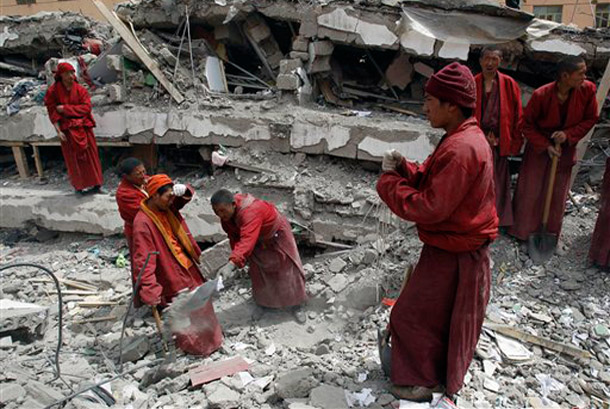 Dharamshala: - Twenty-one Tibetans Tibetans have been reportedly arrested by the Chinese authorities in protest against rampant land grabbing in Kyegudho, Kham region of eastern Tibet, where the devastating earthquake that hit the area in 2010, killing thousands of people.

The natural disasters not only affect the people in the area, but Chinese failed policies now indirectly also affect on the remaining family members after the worst disasters to recover.

More than 21 Tibetans are arrested after hundreds of local Tibetans in Kyegudho, protested against the local Chinese authorities on 9 April, according to the Central Tibetan Administration based in the northern Indian town of Dharamshala.

The Tibetans were protesting against rampant land grabbing and forceful eviction of Tibetan families from their ancestral homes in the Kyegudho region. Six Tibetans are reported to be seriously injured during confrontation with the Chinese security forces.

Reports are emerging from Kyegudho of eastern Tibet that self-immolation protest against land grabbing reportedly occurred in recent months.

After the devastating 2010 earthquake, thousands of Tibetans in Kyegudho have been rendered homeless due to a rampant land grabbing rush by Chinese authorities in the area.

Two Tibetan women have also set themselves on fire protesting against these forced evictions and the lack of any concrete help from the central government in Beijing.

However, emerging reports from Tibet also say there are around five people in Kyigudho area stuck on the unconfirmed self-immolation protest list.