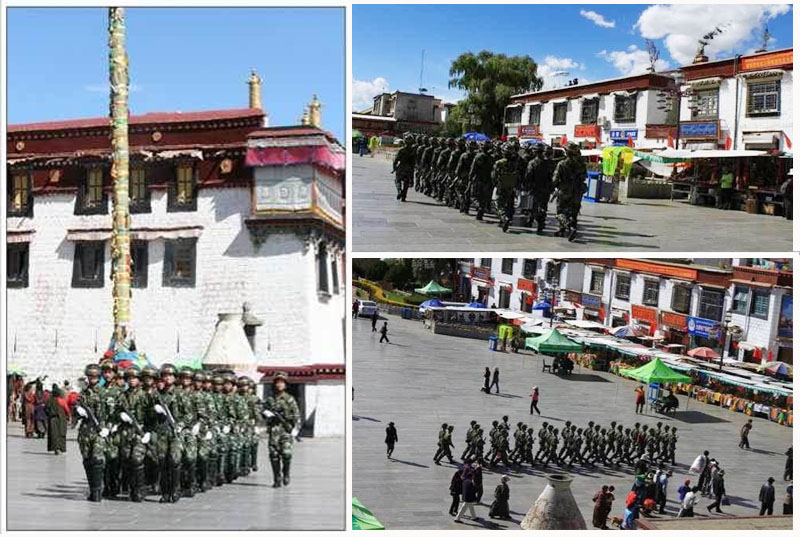 Dharamshala: - Reports arriving from Tibet indicate that the Chinese authorities have imposed severe restrictions on free movement and other activities in the Capital, Lhasa, central Tibet.

The Chinese military is also reported to have increased its presence in the three major monasteries of Sera, Ganden and Drepung, near Lhasa recently months.
Chinese troops are also said to be patrolling the Lhasa market area and the monasteries of Tsuklakhang, Potala and Ramoche.

Tibetans, including monks and nuns from outside Lhasa are now required to carry Identification cards to enter the city, with reports that people are being prevented from entering, despite possessing proper documents.

The measures are the latest restrictions imposed by the Chinese authorities aimed at curtailing the fundamental and religious freedoms of the Tibetan people.

Chinese interference has affected the traditional structure of Tibetan monasteries, with age limits being imposed on monks and their numbers restricted. Monks are further required to obtain permission from local authorities to conduct traditional ceremonies, including ritual prayers in villages and households.

China has always claimed that Tibetans enjoy unconditional religious freedom and the latest restrictive measures have been taken after a series of self immolations by Tibetans protesting the Chinese regimes repressions.

At-least 117 Tibetans set themselves on fire to protest Chinese rule since 2009 and they for the return of His Holiness the Dalai Lama to Tibet and freedom for Tibetans.