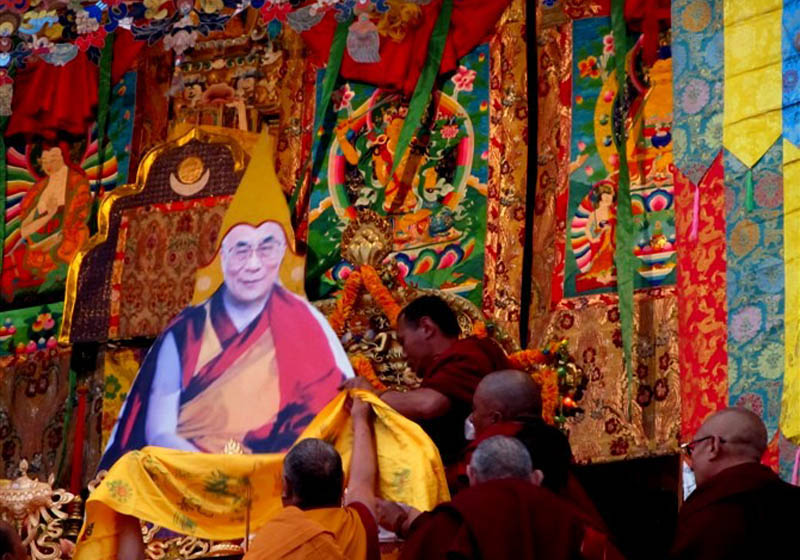 Dharamshala: - Emerging reports coming out Tibet say, Tibetans in Dege and Tsolho- two counties in separate regions in eastern Tibet (Chinese: Sichuan and Qinghai) were ordered by local Chinese authorities to stop displaying the portraits of His Holiness the Dalai Lama, the spiritual leader of Tibet.

Latest reports show the situation in Tibet still remains same after weeks-long reports said Beijing had relaxed its policies of publicly denouncing His Holiness the Dalai Lama and banning worship of his image.

"After receiving reports claiming Chinese authorities in some Tibetan areas were allowing Tibetan to display portraits of His Holiness the Dalai Lama, thousands of Tibetans from nine villages, including Palyul, Terlung, Onpo, Hepa areas in Dege county, Kham region of eastern Tibet held a huge gathering on June 22, and publicly enthroned a portrait of His Holiness the 14th Dalai Lama with full ceremonial gaiety- horse racing and dancing," Yangchen, a Tibetan woman living in India told The Tibet Post International (TPI), citing sources in the region.

"The local authorities in Dege county, Karze in Eastern Tibet (Chinese: Dégé, Ganzi Autonomous Prefecture in Sichuan Province) however, have harshly repressed and issued a strict warning against the local Tibetans for displaying of His Holiness the Dalai Lama's portraits without permission from the Chinese authorities," sources said.

"Seventeen trucks carrying hundreds of armed Chinese police have arrived at the festival scene on June 25 and portrait of His Holiness the Dalai Lama, which enthroned was forcefully taken away by Chinese authorities," she said.

According to the sources, the police rounded up the festival and began harshly questioning the locals. Immediately two Tibetan men arrested after they surrendered themselves saying they were responsible for organising the festival and enthroning the portrait of His Holiness."

"The two Tibetans were released after authorities keeping them two days in custody. They were warmly greeted by locals on their release on June 29. They were strongly praised for their intelligence and action at a meeting led by heads of the nine villages- the unity among the local Tibetans is very strong and they vowed to defend it by all cost in future," she added.

A similar source stated that local Chinese authorities have issued a strict warning against the locals in Tsolho, Amdho region of north-eastern Tibet (Chinese: Hainan, Prefecture of Qinghai Province) for displaying of His Holiness the Dalai Lama's portrait without permission from the Chinese government.

"Many police had arrived at the Dekyi Thang Monastery in Tsolho county, north-eastern Tibet in recent days- monks have been harshly oppressed during a raid at the monastery," said Tenzin originally from the region, currently living in India told the TPI.

'The monastery is currently surrounded by Chinese authorities,' said Tenzin, following the reports saying China had relaxed its policies of publicly worship to His Holiness the Dalai Lama and banning of His Holiness' portraits. "Chinese police have warned the monks that they risked arrest and severe punishment if they did not cooperate with the authorities and if they do not respect the government orders," he further added.

Another source said that Chinese government is playing tricks with the local Tibetans in recent days, in a bid to prevent further protest against China's repressive policies on Tibetans, as Beijing officials may allow foreign tourist and journalist groups to enter Tibet near future.

The restrictions had been tightened in these areas ahead of His Holiness the Dalai Lama's 78th birthday on July 6 and targeted those monasteries and public place where openly displaying His Holiness' portraits, it added.