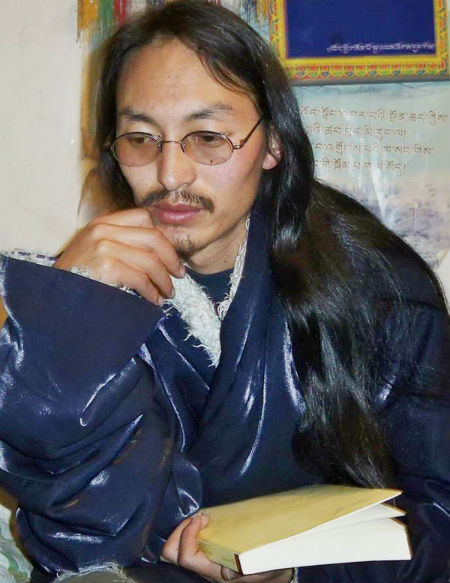 Dharamshala: - Gangkye Drupa Kyab is a writer, poet, teacher and a father of two who was sentenced early this month to five years and six months in prison for alleged political activities against Chinese rule in Tibet.

Gangkye Drupa Kyab was first detained on the night of 15 February 2012 by a group of about 20 Public Security Bureau (PSB) officers from his home in Serta (Ch: Seda) County. His house was raided and his wife, Wangchuk Lhamo, was given no explanation despite repeated appeals at the time of detention. Since then, for 17 months, his whereabouts remained unknown to family and friends until his sentencing on 1 August 2013.

Choenyi Woeser, an exile Tibetan journalist and a childhood friend of Drupa Kyab told the India based Tibetan Centre for Human Rights and Democracy (TCHRD) that local Tibetans consider Drupa Kyab a highly conscientious individual and teacher, having a great love and respect for Tibetan culture and language.

During his primary school days, Drupa Kyab was physically weak and no one expected him to perform great tasks, Woeser remembers. However, he had a melodious voice and teachers often made him sing songs. But one day, his relative, in whose house he was staying suffered injuries in a brawl. Immediately, Drupa Kyab came to his rescue and defended him. As a student, he was focused on his studies and respectful to his teachers, but had no interest in sports.

TCHRD has translated and edited two short poems composed by Drupa Kyab. The poems reveal the suffering and pain endured by Tibetans during the crackdown on 2008 protests, and the hardships faced by ordinary Tibetans trapped in the web of official corruption and profiteering.

Tears of the Past

The history of the Snow-landers
When I think of it now, all I get is tears
No moments of joy occur in our hearts
When all we do now is swallow tears

In the midst of illusory history
And the war of the brazen reds
Countless Tibetan lives have been lost
Ah, this suffering!

Amid the war of the past
Our protector exiled behind the snow-mountains
The red terror tramples upon the Tibetan people
Who can endure the present loss?

All the Mind Yearns for is Money

All the mind yearns for is money
As nature is turned upside down the body and mind suffer
To dispel suffering, they search for lords and deities everywhere
The facilities and skills of modern science
Cannot be secured easily without money