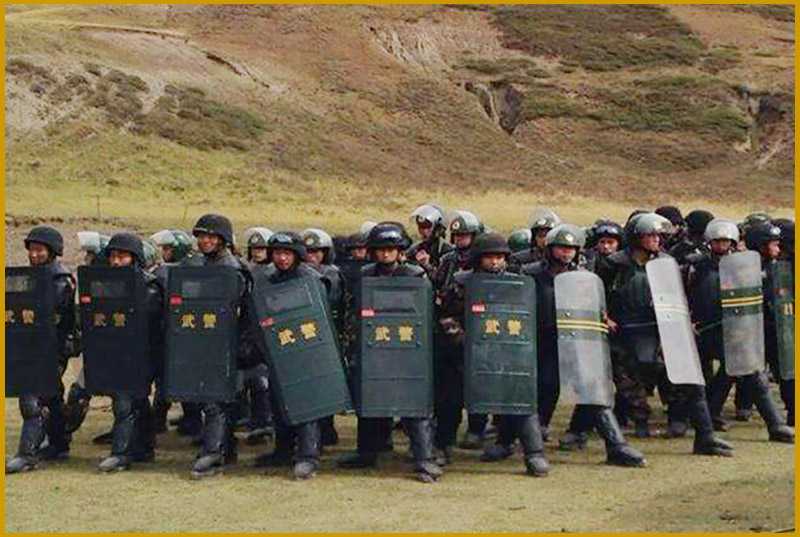 Dharamshala: - At least three Tibetan protesters have been reportedly killed after Chinese police and security forces fired into a crowd of protesters in Driru County, eastern Tibet. Chinese authorities have issued a notification aimed at restricting the movements of Tibetans.

Photographs receiving from Tibet show a strong presence of Chinese paramilitary forces at the areas in Driru County in eastern Tibet, warns of further crackdown on Tibetan protesters.

Latest reports to The Tibet Post International said "at least three Tibetans have been killed so far in the security forces' crackdown on a weeks-long protests.

It has sparked after residents refused orders to display Chinese flags to celebrate National Holiday. But details of their death have not yet been found."

Since September 3, the situation in the areas was reported to be grave and remained tense after a massive crackdown carried out by armed Chinese military forces to disperse Tibetans peacefully protesting against the government political campaign.

At least two Tibetans can be seen in the photos carrying bullet holes in the stomach area while another Tibetan man has blood coming out of bullet injuries on his head.

Latest photos receiving from the region also show large number of armed Chinese police and paramilitary forces marching in the areas to warn of further crackdown (October 8), while other Images show Chinese troops and police standing around their trucks another area in the county.

Some images show the increasingly tense situation in the region and many large military trucks loaded with full of Chinese security forces are still arriving in, sources added.

According to the sources, 'the government of Tibet Autonomous Region has issued a notification aimed at restricting the activities of Tibetans in Driru County, particularly those who are traveling must be carefully checked and requirements must be met for a special permission before entering other areas, including Lhasa City, the capital of Tibet.'