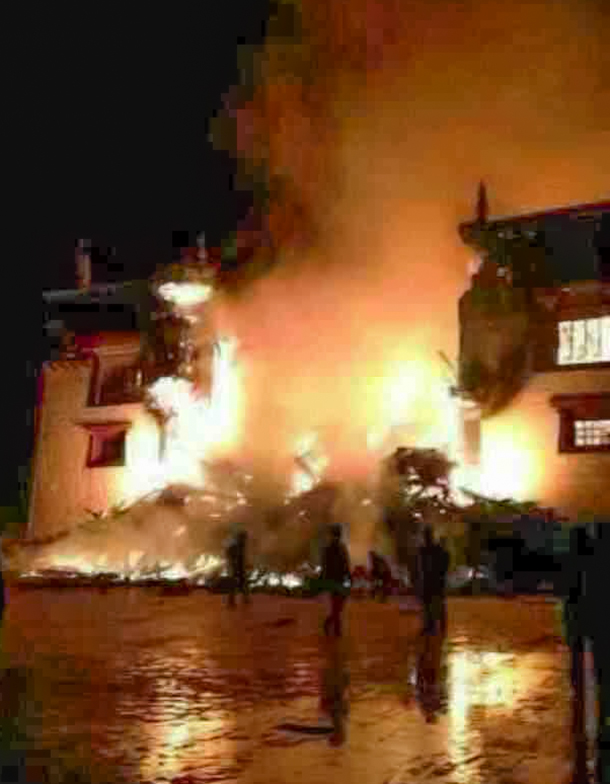 Dharamshala: -- Reports coming out of Tibet said, a fire almost entirely destroyed one of the three main temples of Lithang Monastery in Kham Region of eastern Tibet.

The flames engulfed the roof of the building and damaged early printed books, statues and ancient Tibetan writings, including an exquisite antique Thangka of Palden Lhamo, one of the most popular relics. However, some of the cultural artifacts inside were saved," Geshe Kalsang Gelek, a Buddhist monk living in exile told The Tibet Post International.

According to the sources, "the wild-fire broke out Saturday, November 16, (10 p.m. local time) after an electrical appliance in the second-floor visitors' reception area short-circuited."

"The fire was extinguished before it could spread to the monastery's other prayer halls and living quarters. But, it is impossible to estimate damage right now," he added.

The monastery consists of three main temples, one of which was reconstructed in 2011. Ganden Thubten Choekhorling or Lithang Gonchen was a home to many famous and influential figures in Tibetan Buddhism, such as the 7th Dalai Lama Kalsang Gyatso and the 10th Dalai Lama Tsultrim Gyatso.

"Currently, there are over one thousand monks residing and studying at the monastery, including over 600 hundred students from the School of Buddhist Philosophy and nearly 200 monks from the Tantric College," Geshe Gelek added.

Located in the historical Tibetan region of Kham Province, eastern Tibet, which is known for its independent-minded warriors, the Lithang Monastery has been at the center of several clashes between Tibetans and the Chinese authorities. 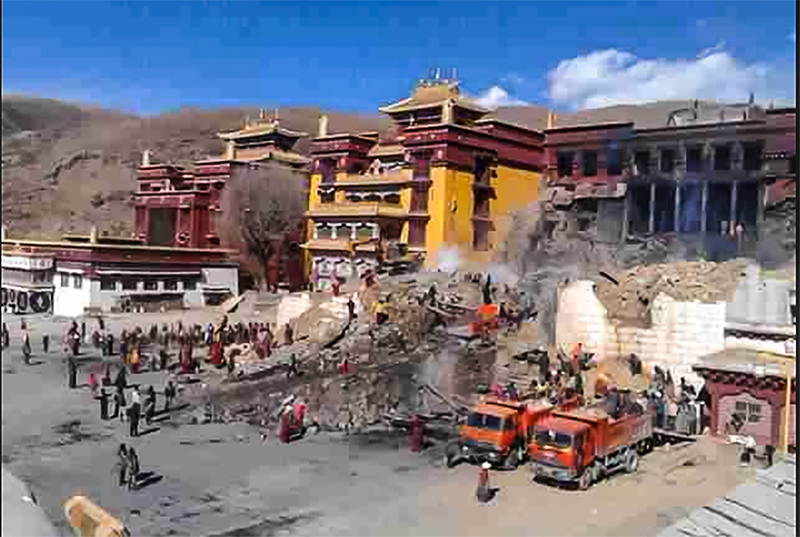 During the 1950s, the region around Lithang was one of the main areas of Tibetan armed resistance to the presence of the Chinese troops. A resistance group called "Four Rivers, Six Ranges" was active in the eastern Tibet.

In 1956 the Chinese military laid siege to the monastery with airstrikes and ground troops, killing many of the monks and laymen who had barricaded themselves inside.

The town is located at an altitude of 4,014 metres. It is on open grassland and surrounded by snow-capped mountains and is about 400 meters higher than Lhasa, making it one of the highest towns in the world.

A crackdown officially described as "patriotic education campaign" followed in autumn of 2007, including several politically motivated arrests and attempts to force local Tibetans to denounce His Holiness the Dalai Lama.