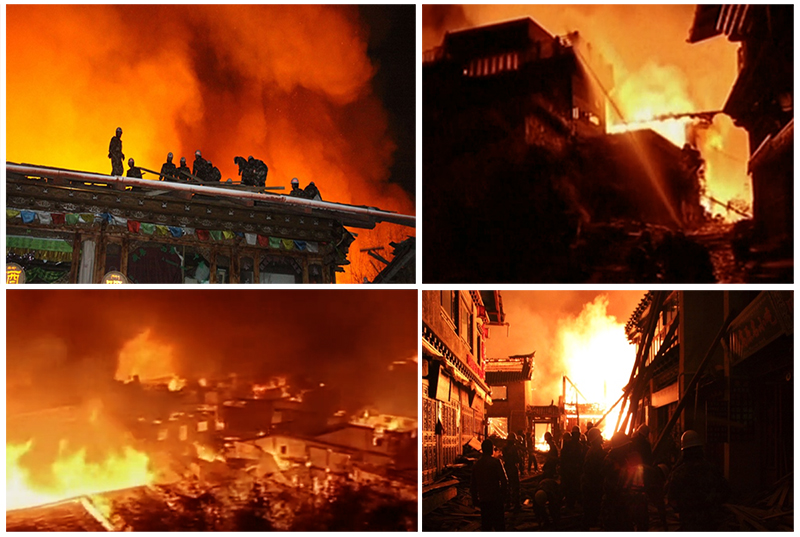 Dharamshala: - A huge blaze which occurred early on 11 January has burned down 70% of the ancient Dorkhar town in the Gyalthang County, Kham Region of Eastern Tibet, (Diqing prefecture, Yunnan Province) along with 242 houses.

The fire, which broke out at 1:37 am at the Ruyi Inn, ruined about two thirds of the 1.5-square-kilometer Dorkar town area and lasted 10 hours until it was put out.

Semkyi Nyida Dorkhar (Chinese: Dukezong), meaning "town of the sun and moon" in Tibetan, is known for its well-preserved ancient Tibetan dwellings, and is one of the most renowned resorts in Gyalthang County in eastern Tibet.

There was no immediate report of casualties, and the cause of the fire was unclear. State media, citing local authorities, said the blaze started in a guesthouse and was ruled accidental.

Photos and video footage however showed Dorkhar Dzong and its labyrinth of houses engulfed in flames that turned the night sky red.

According to Chinese state media reports, a total of 242 houses, mostly made of wood, were destroyed and other 43 buildings, as well as a further 50 roofs of buildings, were dismantled to prevent the fire from spreading.

Dorkhar township, known as Shangri-la has one of the world's largest Tibetan prayer wheels, which was saved mainly because it is made of metal in recent decades. Gyalthang County is situated in an area believed to be the inspiration for James Hilton's mythical Shangri-La — flattened two thirds of the town's old centre in eastern region.

"All the valuable things we had saved for a thousand years are gone. Now we have nothing, except the prayer wheel," he added.

'More than 2,000 firefighters, soldiers, police, local officials and volunteers responded to the blaze and brought it under control at around 11 a.m.,' local officials said.