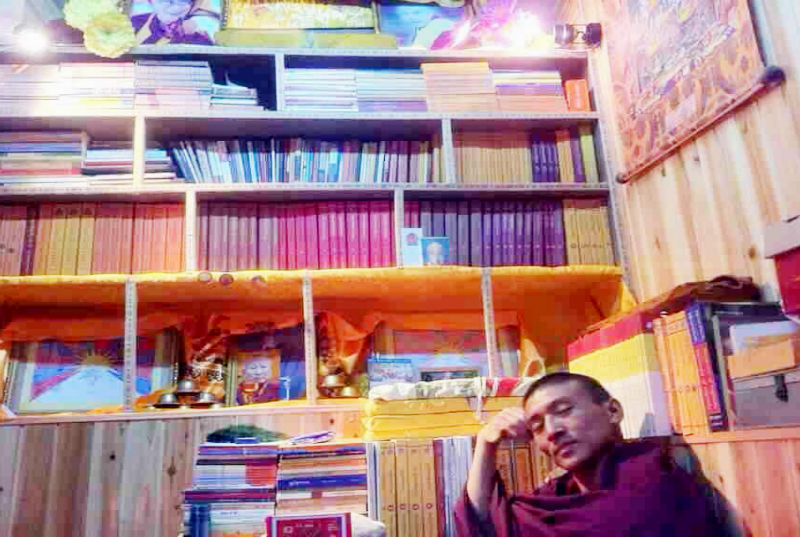 Dharamshala: - A Tibetan monk, Lobsang Palden from Kriti monastery in Amdo Ngaba region of Tibet (Chinese: Aba, Sichuan), set himself on fire calling for frienship with Chinese people today in the morning.

Since 2009, More than 120 Tibetans have resorted to such drastic actions of burning themselves calling for "freedom in Tibet" and "return of the Tibetan Spiritual Leader the Dalai Lama from exile" but for the first time in history of Tibetan movement, the Tibetan monk set himself on fire calling for "unity and friendship among the minorities and Han Chinese" according to Ven Kanyak Tsering and Lobsang Yeshe, media coordinator for the Kirti Monastery based in Dharamshala.

Lobsang Palden set himself ablaze on the very site where Tapey, the first Tibetan who self immolated in the movement in Tibet.

The site is the main road in the region, and the street where Lobsang set himself on fire is dubbed as "Heroes'Street" by the local Tibetans because more than a dozen Tibetans have selfimmolated at the same street in last few years.

"Lobsang Palden was badly burnt and was taken away by the police. His whereabouts are unknown," said the Beijing based Tibetan writer and activist.

According to reports coming out of Tibet, another Tibetan monk in Malho region of Tibet (Chinese: Huangnan Tibetan Autonomous Prefecture, Qinghai) also set self on fire today at around 7 am (Beijing time) in protest against the Chinese government, but as of now, the identity and status of the selfimmolator is unclear.

Labeling the Tibetan spiritual leader His Holiness the Dalai Lama as "terrorist", Beijing says that the Tibetan leader is trying to split Tibet from the mainland China. However, the Dalai Lama has defied the accusation saying that Tibetans are willing to stay under China if Beijing grants them a "genuine autonomy" under the Peoples Republic of China.

According to the Chinese official news agency Xinhua on Sunday, March 16, the Chinese Ministry of Public Security has vowed to tighten security and take decisive measures to deal with any anti-China protest in the country.

"The ministry will reinforce public security in sections of key cities, such as Shanghai, Changsha, Kunming, Urumqi and Lhasa, in order to effectively prevent and crack down on criminal activities," reported the Chinese news agency.

Tendar Tsering is a freelance journalist based in Minnesota, U.S.A