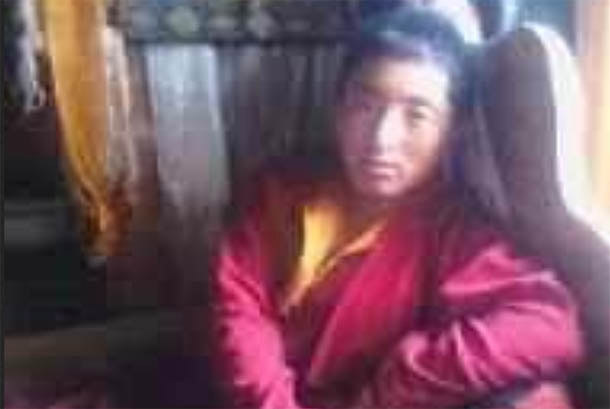 Dharamshala: - Sources coming out of Tibet say a Chinese court in the Tibet Autonomous Region has sentenced a Tibetan monk to a ten year prison term over shouting slogans "Tibet is an independent country" and "Long live His Holiness the Dalai Lama."

"Ven Lobsang Gedun, 21, was sentenced previous week after being held in a detention center in Chamdho, Kham region of eastern Tibet for more than a year," sources said, adding "it is sad that he was not allowed to meet his family members."

"He was beaten and tortured while in Chinese police custody and the condition of his health is unknown," Gyatso an exiled Tibetan currently living in India told The Tibet International (TPI) quoting local Tibetans.

TPI has earlier reported on the Chinese police arrest of Gedun, a monk of Dzongsar Monastery from Tsawa Pashoe County, Kham Province of Eastern Tibet.

"On 1 July, 2013, Gedun rose in the middle of the recital of the Chinese National Anthem during an event of the Founding Anniversary of the Chinese Communist Party and reportedly shouted slogans like "Long Live Gyalwa Tenzin Gyatso (His Holiness the Dalai Lama) and "Tibet is an independent country" while expressing his resistance against the Chinese oppression,' sources said.

No further details are available about the charges against him, including his whereabouts and condition, due to the blocking of communication channels to Tibetan regions.