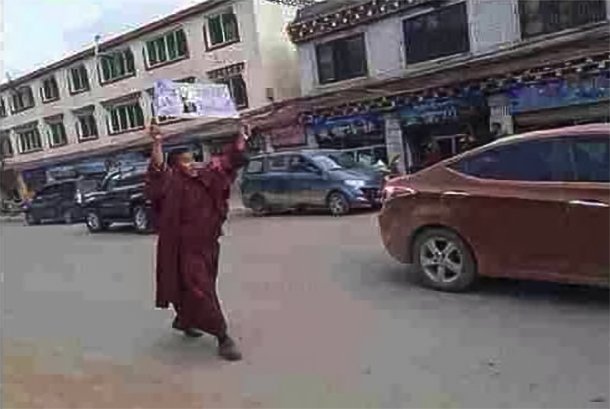 "Sonam Yarphel, a 22-year-old monk of Mang-ge monastery was arrested while staging a lone protest in the street of Sershul county by shouting slogans— protesting against Chinese rule in Tibet," Ven Jampal Woeser, a monk from the Sera Monastery based in South India told the Tibet Post International (TPI) on Wednesday evening.

"Chinese security personnel immediately arrived at the site of the protest and forcibly detained him," Ven Woeser said, adding "He was peacefully protesting against the Chinese government on the streets of Sershul by carrying a portrait of His Holiness the Dalai Lama before being confronted by the authorities."

"He walked about for few minutes in the street while raising a portrait of the Tibetan spiritual leader over his head, shouting slogans such as "Freedom for Tibet and Long live His Holiness the Dalai Lama," the source said citing contacts in Tibet.

An image received from in the restive Tibetan county also shows the young Tibetan monk staging a lone protest by shouting slogans against Chinese rule and carrying a portrait of His Holiness the Dalai Lama.

According to the source, a large numbers of Chinese soldiers and police officers reportedly advancing towards the Mang-ge Monastery. Yarphel, a monk from the Mang-ge Monastery in Sershul County. Sources continued that his current condition and whereabouts remain unknown.

The authorities strictly controlling the movement of the monks. Many monks from the monastery have been disappeared, while many have been sentenced to lengthy jail terms on charges of "subversion".

Soepa, a 36-year-old monk from Mange Village in Sershul County has become mentally unstable in 2013 after enduring severe torture during five years' of imprisonment in the notorious Chushul Prison. He was arrested in 2008 after staging a peaceful protest in front of the Jokhang Temple on Barkhor street shouting slogans against Chinese rule in Tibet.

Three Tibetan monks have been arrested for protesting against the Chinese rule in Sershul county on 10 March, 2013—the 54th anniversary of Tibetan national uprising day.

After the latest incident, the Chinese government has imposed severe restrictions on internet and phone connections by increasing a wider crackdown on communications across the region in an attempt to prevent any news reaching the outside world.