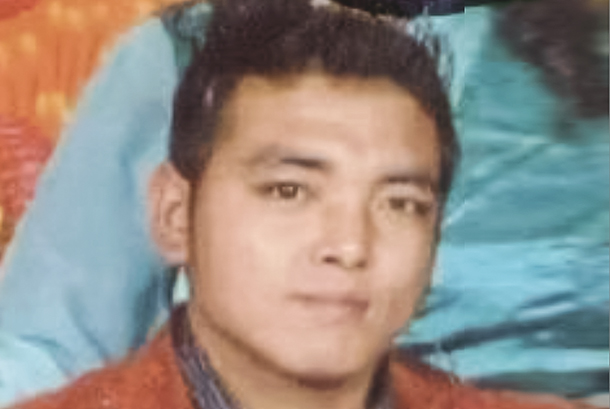 Dharamshala: - Tibetan political prisoner, Tenzin Choedak, died at 1 pm on 5 December after serving nearly six years of a 15-year sentence at the Chushur Prison near downtown Lhasa City. However, due to increased beating and torture during the past six years, his chances of survival became slim. So he was released and handed over to his family on 2 December 2014.

The Lhasa City Public Security Bureau detained Choedak in April 2008 under the charge that he was one of the ringleaders for the March 2008 protest in Lhasa City. He was then fined 10,000 yuen and sentenced to 15 years in prison by the Lhasa Peoples Intermediate Court that September.

Choedak was severely beaten and tortured during his imprisonment, and his condition worsened about a month ago, according to Gyal, at which time he was moved to Lhasa People's Hospital. "He was seen extremely weak and thin with dark complexion throwing up blood. He had to be supported to walk and placed on the bed. He could not even recognize people known to him," Tsering Gyal, TCHRD, told the Tibet Post International.

Despite his deteriorating health, Choedak remained shackled and escorted by four guards when hospitalized by the authorities. "When the family members complained [about] his state of health in comparison to...when he was taken to prison, the authorities moved him to another hospital," Tsering Gyal said. The doctors all agreed he would not survive much longer.

During this time, his family requested his release but were denied by police who claimed they did not have the authority. Choedak was finally released on 2 December--after the family appealed with the support of the local village committee--only to die three days later, said Tsering Gyal.

Although China was one of the first member states to sign and ratify the UN's Convention Against Torture in 1986, they have failed to implement it. Human rights groups have long condemned the torture and inhumane treatment within Chinese prisons, and Choedak's death serves as yet another confirmation of these conditions.

Choedak dedicated much of his life to human rights and the liberation of Tibet. He previously worked for a European NGO affiliated with the Red Cross, and played an active role in protesting the Chinese occupation of Tibet, which ultimately cost him his life.

His family has also been subjected to harassment and threats, which resulted in Choedak's father fleeing to India 20 years ago. In 1990, Choedak also came to India where he studied at the TCV school in Dharamshala. He graduated from high school and returned to Tibet in 2005 where he began working at an NGO.

During the same 2008 protest in Lhasa for which Choedak was imprisoned, his sister Sonam was injured in the shooting and later detained; she suffered severe beatings at the hand of Chinese police. His daughter was also detained and questioned during this uprising, but was eventually released.

Choedak, also known as Tenchoe, died at Mentsekhang, the traditional medical institute in Lhasa, just hours after being admitted, and only three days after being released to his family by prison authorities. He was born in October of 1981 in the Gyabum Gang village located in the northern side of Lhasa city. He is survived by his father Khedup, his mother Passang, his sister Sonam, and his daughter.