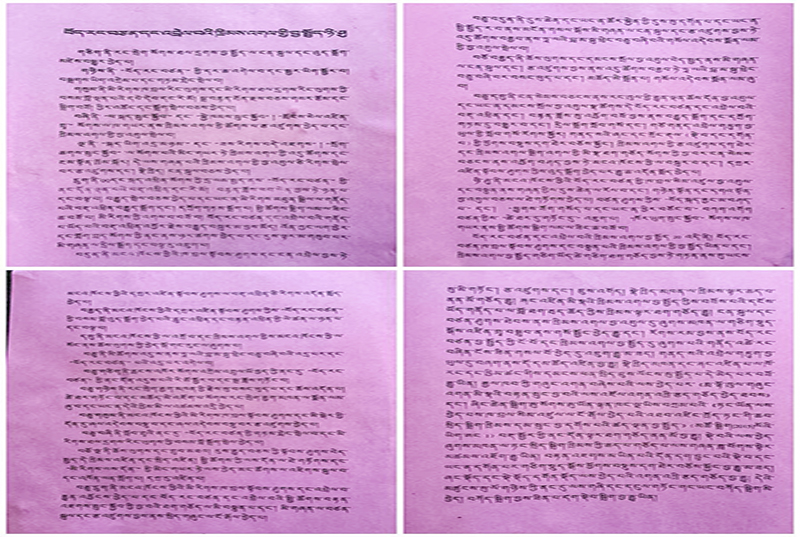 Dharamshala: - Chinese authorities in Rebkong County, Amdo region of north-eastern Tibet (Ch: Tongren County, Qinghai province, northwest China) have issued a notice of 20 "illegal activities related to the independence of Tibet", according to sources in the region.

The leaked list obtained by the Tibet Post International (TPI)– which features prohibitions already in place against self-immolation protests and online advocacy of the independence of Tibet – bans activities including the publication and dissemination of articles, books, videos and audio recordings that promote "separatist goals or oppose China's rule," stated an anonymous source.

"Illegal associations formed in the name of the Tibetan language, the environment, and education are banned. Also banned are the organisation of gatherings or protest rallies supporting the equality of languages and the protection of animals," the source added.

The list clearly shows the systematic compromise of the human rights of the Tibetan people by the Chinese government.

The notice – translated by TPI – of illegal activities and explanatory notes by the Chinese government are as follows:

1. To incite or praise drastic acts such as self-immolation.
2. To hang banners, posters, leaflets or speeches for Tibetan independence.
3. To write, draw, announce, sell or distribute books, art, audio recordings or videos endorsing ethnic separatism or nationalist views that are expressed too forcefully.
4. To establish illegal organisations or activities under the name of the Tibetan language, the environment or education.
5. To incite, plan or lead illegal activities that include protests or gatherings under the banner of the equality of languages, food security or the protection of animals.
6. To use social media including QQ and WeChat to send, download or publicise images, audio or videos that contain information related to Tibetan independence. Or, using the aforementioned social media to spread rumours that undermine national unity or create social unrest and ethnic division. Also, to let others see or use messages on your mobile or computer related to Tibetan independence instead of deleting them immediately.
7. To provide information to outside separatist groups while maintaining relations with them.
8. To read, watch or listen to information related to the idea of Tibetan independence from newspapers, television or radio from a group outside of the state.
9. To legally or illegally travel outside of the state to participate in any religious events.
10. To hang images of the 14th Dalai Lama or of people fighting for Tibetan independence in public places.
11. To place stickers, posters or banners and/or to play music that implies support for Tibetan independence in automobiles.
12. To pray using butter lamps and smoke offerings, to chant or to free animals for self-immolators or to express condolences to their families.
13. To plan to collect donations from separatist groups and individuals outside of the state.
14. To publicise nationalist views that are expressed too forcefully and to discuss Tibetan independence in schools.
15. To use the force of religion and its tenets as well as race to destabilise societal order. Also, under the banner of ethnicity, to plan illegal activities toward government officials and the public including to warn them, take revenge on them and to consider them as enemies.
16. To continue to maintain contact with outside separatist forces and to not pay attention to decisions maintaining social stability. And, to plan or force others to protest against the government.
17. To incite or plan prayer services for the 14th Dalai Lama at monasteries and public places during festivals and other holidays.
18. To incite or plan gatherings for praying for the 14th Dalai Lama under the banner of religion and tradition.
19. To intentionally create rumours about Tibetan independence by publicising messages, images, audio or videos of a variety of regular religious and traditional activities. To send biased publicity of legal activities – including re-education campaigns, the closing of illegal organisations and the prosecution of criminals – to outside of the state and to publicise facilities to outside forces.
20. Other illegal activities include: to participate in festivals when outside forces carry out activities related to Tibetan independence. To destabilise the social order under the banner of forcing others to only speak Tibetan and to kill, sell or free animals.