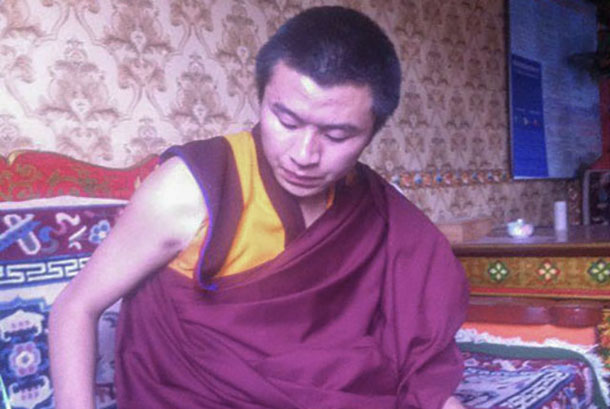 "The three monks identified as Choepal Dawa, Jigme Wangyal, and Choeying Choega, were detained by Chinese police under the cover of night from their monastery on March 28," Mr Ngawang Tharpa told the Tibet Post International (TPI) on Wednesday, April 1.

"Dorjee Dakpa, a layman from Sog County also arrested on unknown charges on the same day and his whereabouts and fate remain unknown," he added.

According to the sources, one of three monks: Choepal Dawa, 27, was sentenced to two years in prison, less than a month after his detention in mid-January 2012. Dawa is a native of Yakla Yultso village of Sog County."

The authorities did not explained the reason for their arrests and their current whereabouts and condition remain unknown at the moment," he said.

"At present it is impossible to get detail information from the region due to restrictions on information and tightened security in the area," he said, speaking on condition of anonymity.

The monks belonging to the restive Tsanden monastery of Sog County (Ch: Suo county, Tibet Autonomous Region) where seven monks were arrested last month for allegedly "spreading out photographs and information dealing the issues of Tibet.

Another monk from the same monastery named Lobsang Dawa was also arrested on March 20, on unknown charges and his whereabouts are also unknown.

"To prevent the use of social networking sites and other social media such as WeChat to publicise images, audio or videos that contain information related to Tibet issue," sources said, adding "Further restrictions have also been imposed in the region."

"Local Tibetans also believed that the recent arrests have been made in connection with sharing information and pictures related to Tibet issues via social media," he added.

But, a China appointed Tibetan official recently claimed that 'there was no ban on foreign journalists traveling to the region.'

"To be honest, we don't have a policy in Tibet that dictates those who can come and those who cannot come," Pema Trinley or Padma Choling, a China appointed Tibetan official, said on the sidelines of the Chinese National People's Congress in Beijing.

"Especially, this year marks the 50th anniversary of the establishment of the Tibet Autonomous Region," he said. "We will hold major events to demonstrate the results of development and growth of the area since then. We welcome all of you to come."