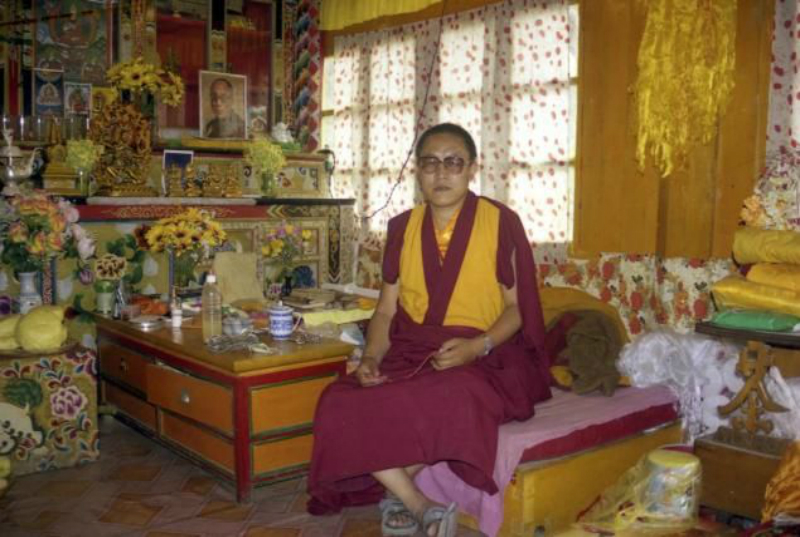 Dharamshala -- The prominent Tibetan dissident's  body was cremated this morning near Chuandong prison in Chengdu, refusing demands from family members and the international community.

Tenzin Delek Rinpoche's  body was cremated at a secret prison, located approximately 5km from Chuandong prison in Chengdu, Thursday morning [at around 7am local time] by the Chinese prison authorities.

"The cremation took place against the wishes of his family to release the body in order to perform the final Buddhist rites in his hometown Lithang County of Kham Province, eastern Tibet," Geshe Nyima told the Tibet Post International Thursday morning.

"The cremation follows unsuccessful negotiations over the release of the body between Tenzin Delek Rinpoche's family and prison authorities, which was followed by more than 100 Tibetans staging a peaceful sit-in protest outside Chuandong prison," sources added.

According to his family members, "No cameras or phones were allowed inside the undisclosed prison where Tenzin Delek Rinpoche was cremated." His family described the prison conditions as despicable and "worthy for a beggar". "All of Tenzin Delek Rinpoche's belongings were reportedly burned and the family and mourning crowd were not permitted to hold on to any remains. "

Geshe Nyima, Tenzin Delek Rinpoche's student and cousin says in a phone message: "I am heartbroken, but also extremely angry. My family cannot accept this. We will not stop demanding justice until we have answers.

Chinese authorities denied us our right to pay our final respect to Tenzin Delek Rinpoche and refused to return his body to us for Buddhist rites. My family believes he was murdered."

In Washington, members of the House of Representatives also demanded Chinese authorities return the lama's body to his family members for a funeral.

Human rights groups have long said the monk was persecuted by the Chinese and arrested on false charges because he advocated for Tibetan rights.

At a hearing on Tibet by the Tom Lantos Human Rights Commission on Tuesday, Hollywood actor Richard Gere, a longstanding advocate for Tibetan freedom, called the monk "one of the good men of the community" who found commonality between Tibetans and Chinese.

Tenzin Dolkar, Executive Director of Students for a Free Tibet, says: "Injustice was committed against Tenzin Delek Rinpoche and his family by the Chinese government. With his death, Tibetans in Tibet lost their beloved leader and teacher. Today, their right to perform the last Buddhist rites for Tenzin Delek was taken away."

"Chinese authorities cremated his body with complete disregard to the family's wishes. It is a failure of world governments to allow the Chinese government to get away with committing such violence against Tibetans," she added.

"Throughout his life, Rinpoche worked to protect Tibetan culture and religion from the onslaught of repressive Chinese policies. He also strived to safeguard Tibet's fragile environment by advocating against illegal mining and pollution of Tibetan river waters," the Central Tibetan Administration said during a prayer service.

Chinese authorities have refused to release the body of a Tibetan lama who died in a Chinese prison, prompting a sit-in outside the prison by more than 100 Tibetans, sources said Wednesday.

The monk’s family and followers learned of his death on Sunday. The next day, thousands gathered to mourn at a government office in Nyakchukha County in (Ch: Yajiang western Sichuan), sources said.

The Chinese police fired shots into the air, used tear gas and beat protesters to disperse the crowds, the sources said, and at least 23 people were sent to a hospital for treatment on Monday.

The protesters demanded that the Chinese authorities hand over the monk’s body to the family for funeral rites, the sources added.

"We are saddened to learn that Tenzin Delek Rinpoche, a Tibetan lama who has been a political prisoner since 2002, has died in prison. We express our deepest condolences to his family, friends, and supporters," the U.S. Department of State said in a statement issued on July 13.

"The United States had consistently urged China to release Tenzin Delek Rinpoche, most recently out of concern for his health. We hope Chinese authorities will investigate and make public the circumstances surrounding his death," John Kirby Department Spokesperson said.

"We urge Chinese authorities to return his body to his family or to his monastery so that customary religious rituals can be properly performed," Kirby added.