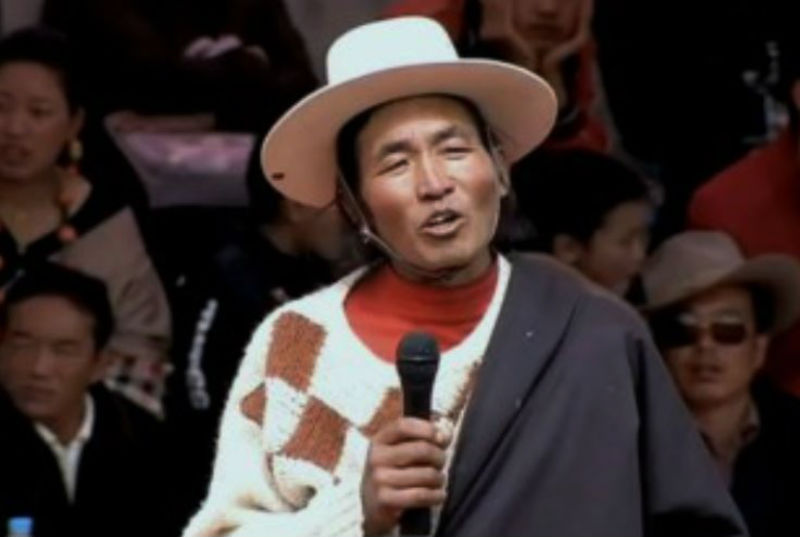 Dharamshala — Rungye Adak, one of the most well-known Tibetan political prisoners was reportedly released today [Friday, July 31] at local time 1 AM, after serving a eight-year prison term in Chinese jail.

Chinese police took him in a vehicle straight to his home in the early morning without informing his family, in order to prevent a public celebration and reception after serving eight years in jail, sources said.

Adak known as a respected local figure and father of eleven, was detained in August 2007 after emphatically addressing a crowd of thousands of Tibetans who had gathered at the Horse Festival of the Lithang County in eastern Tibet.

Adak also passionately spoke of the anguish endured by Tibetans under the stifling hold of China , "Although we can move our bodies," he said, "we can't express what's in our hearts."

According to eye witnesses, Adak, cutting a striking figure in a white cowboy hat and traditional chupa slung over his shoulder, called for the release of political prisoners such as Panchen Gedhun Choekyi Nyima and Tenzin Delek Rinpoche, a highly respected monk and community leader, who recently died in Chinese prison while serving a life sentence on the dubious charge of "conspiring to cause explosions".

Adak also called the return of His Holiness the Dalai Lama to Tibet. The nomad had taken the security personnel by surprise and was able to complete his address to roars of approval from the crowd before he was arrested by armed police.

Soon after, Adak was detained and charged with "provocation to subvert state power," and was indicted by the Kardze Intermediate People's Court on four counts ranging from disruption of law and order to state subversion. He was subsequently sentenced to eight years imprisonment with deprivation of political rights for four years. During the trial, the judge stated that by calling for His Holiness the Dalai Lama's return, Adak had "committed the crime of subverting the People's Republic of China."

In response, Adak told the court, "I wanted to raise Tibetan concerns and grievances, as there is no outlet for us to do so." He went on to say there is no one in Tibet who does not have faith in, loyalty to or the heartfelt wish to see the return of the Dalai Lama. He countered "propaganda" by the Chinese authorities that Tibetans have lost faith in the Dalai Lama, saying: "That is wrong, but we have no freedom to say so."

Adak's nephew, Adak Lopoe, was given ten years, and an art and music teacher named Kunkhyen was given nine years, both for crimes of endangering national security--in other words, for trying to inform the outside world about Adak's protest.

Runggye Adak's actions were labeled a "major political incident" by China's central government, but to Tibetans he became an instant hero. For a few minutes, an uncensored voice had been heard that mirrored their secret dreams and burning resentments.

The nomad's plea inspired renewed resistance to China's control in Lithang County, which resulted in the harshest crackdown the region had seen in decades.

Although, little known is of his whereabouts after his release, Adak is believed to still be in Lithang.