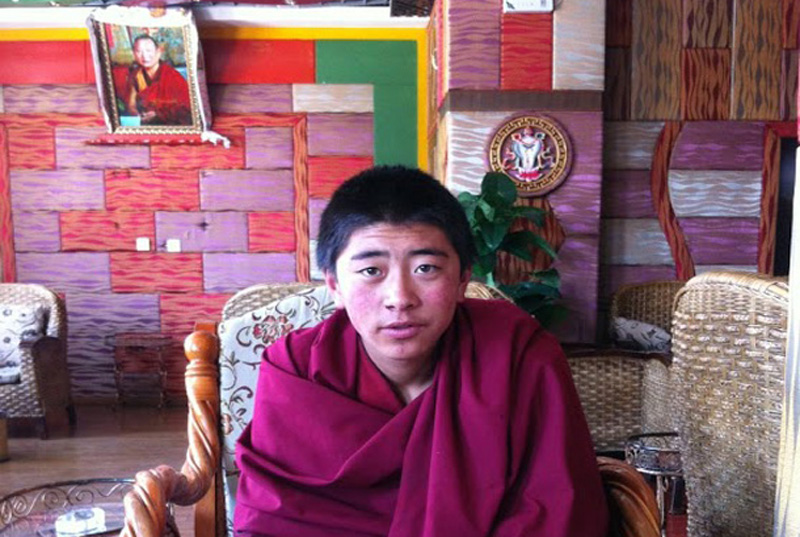 Dharamshala — Sources coming out of Tibet say a Tibetan Buddhist monk was reportedly arrested by Chinese authorities in Ngaba County following a peaceful protest against the Chinese government rule.

The monk, Lobsang Kalsang, 19-year-old from Kirti Monastery, marched into the streets of Ngaba County of Amdo, north-eastern Tibet, calling for "freedom for Tibetans", "the return of His Holiness the Dalai Lama to Tibet" and raised slogans for his long life.

A video footage also shows the Tibetan monk, staging a solo protest on a street in Ngaba county on Monday.

"A group of Chinese security personnel arrived at the scene barely a few minutes into his protest and arrested him arbitrarily. The crowd of Tibetans who had gathered around the streets and in front a police station expressed their solidarity when he was detained," a source was quoted as saying.

Lobsang Kalsang, a native of village no. 2 of Meruma town, Ngaba County in Amdho Region of north-eastern Tibet Tibet (Ch: Aba County, Tibetan and Qiang Autonomous Prefecture in the north-west of Sichuan Province).

According to the sources, Kalsang became monk at a young age at Kirti Monastery where he studied Buddhist philosophy and culture, and Tibetan language. "Kalsang is a son of Tsering Tenkho and Lhakyi," Ven Tsering said, adding that "he has three brothers and sisters."

In addition, Chinese police have also detained a lay Tibetan for unknown charges, sources said "further details are not available," he added.

He was sentenced on Novewmber 7, 2014, along with another Kirti monk, Lobsang Gyatso, 20, for separatist activities. Gyatso was arrested from his monastery and sentenced to serve three years in prison.

"Tenpa was arrested when he was 19, after his peaceful protest on April 26, 2015, wearing a bandana with a hand-drawn snow-lion flag of Tibet and carrying a large portrait of His Holiness the Dalai Lama.

In 2008, his maternal uncles, Shangwo Tsedak and Choephel, were sentenced to six and fours years of imprisonment respectively.