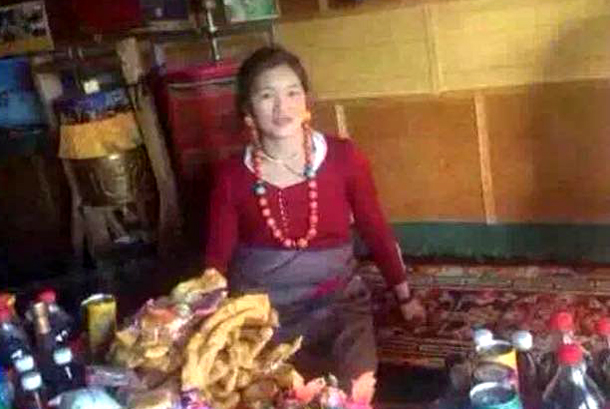 Dharamshala — It emerged that on the afternoon of September 10th in Tibet's Ngaba County of Amdo regopm in north-eastern Tibet, two young men began a peaceful protest that slowly incorporated much of the local residents.

During the protest, police arrived and allegedly arrested one woman, a 64 year old grandmother on the scene. Her whereabouts remain unknown.

"The incarcerated grandmother's family name is Namkha Kyab and is originally from Rongkarsar, Ngaba. She has nine siblings and works as a street cleaner, according to Ven Lobsang Yeshi," Lobsang Yeshi and Kanya Tsering from Kirti Monastery told the Tibet Post International.

"The day of the protest, other protesters were also allegedly arrested by police, however their identities remain unknown."

The day after the incident, on September 11th, five monks from Kirti Monastery were also allegedly arbitrarily detained while going for a walk, and were not sentenced for a crime. Most of the monks were released from jail after the third day, however 22 year old monk Lobsang Sonam remains in detainment on charges unreleased by local authorities.

"Lobsang Sonam is also from Rongkarsar, Ngaba. His father's name is Kalsang, and his mother's name Tsering Dolma, and he has three younger brothers," said Ven Lobsang Yeshi. "He has been a monk at Kirti Monastery since he was a child."

This protest follows another from last month, on the morning of August 20th, when Dorjee Dolma, a 29 year old mother performed a solo peaceful protest and was immediately arrested by ten policemen, Ven Kanyag Tsering, a monk with close contacts in the Tibetan region, told the TPI.

"Dolma is the second of four daughters of father Dorjee Rabten and mother Tamdrin Tso, of the Tendartsang house in division no.2 of Me’uruma village, and is the mother of three children."

"Dorjee Dolma, a native of village no. 2 of Meruma town, Ngaba County in Amdho Region of north-eastern Tibet Tibet (Ch: Aba County, Tibetan and Qiang Autonomous Prefecture in the north-west of Sichuan Province)," Ven Tsering added, saying "her current conditions remain unknown." Her father's name is Dorjee Rabten, and mother's name Tamtin Tso. She has three sisters and three sons of her own.