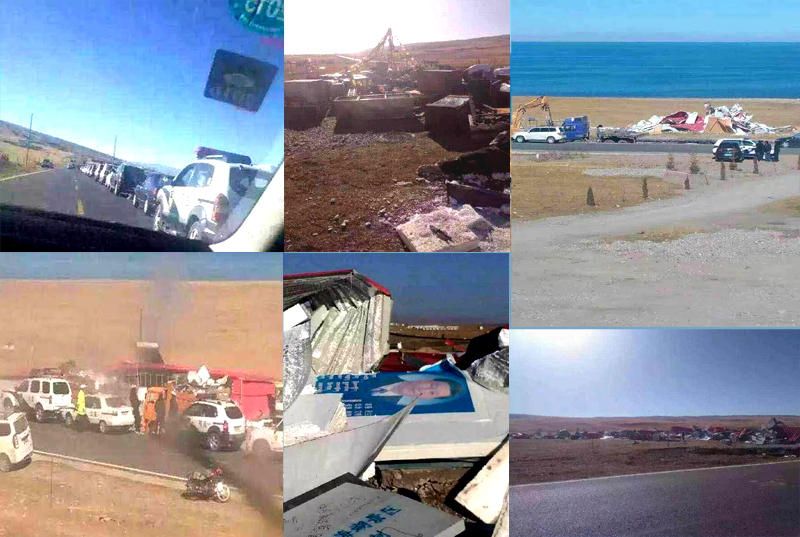 "Local Tibetans who resisted the authorities' call were severely beaten and detained by Chinese police," sources said, adding "the ongoing demolition by Chinese authorities leaves with no choice except taking temporal shelter in tents following the incident."

The destruction in Kala village (Gonpodhong) took place on October 22, after the leveling a few days earlier of homes and shops elsewhere in Trelnak township in Serchen County of Amdo Tsolho. These local Tibetans now are left without any source of income," source told the TPI, speaking on condition of anonymity.

"A group of Chinese authorities arrived with bulldozers on October 22 and began to tear down over 240 Tibetan houses and shops, at around 4.30pm local time," Dolma Tso said, adding, "authorities say the houses and shops are illegal and cause environmental damage."

"The authorities also accused them of 'polluting' the area around the lake, and the surrounding area. Therefore the authorities gave these reasons to tear down the shops and homes built by local Tibetans," she further said, citing contacts in the region.

"After the destruction, the authorities have warned the Tibetan residents not to take photos of the wreckage and not to go near their destroyed property, the source added, saying "the Tibetan victims were not given an opportunity to express their grievances."

The destruction in Kala village followed by just few days a similar operation in Trelnak, in which "Chinese officials and police arrived and tore down 30 structures built by the Tibetan nomads as dwellings and place of business around the holy Kokonor Lake (Tib: Tso Ngon Po).

Several Tibetan nomads were detained and severely beaten before being released. Some of them were, reportedly threatened at gunpoint by Chinese police before they were taken into custody.

Following the destruction of their homes, they returned to their area to attempt to collect their belongings. But Chinese authorities refused them access, beat them severely and held them in custody for hours without charge.