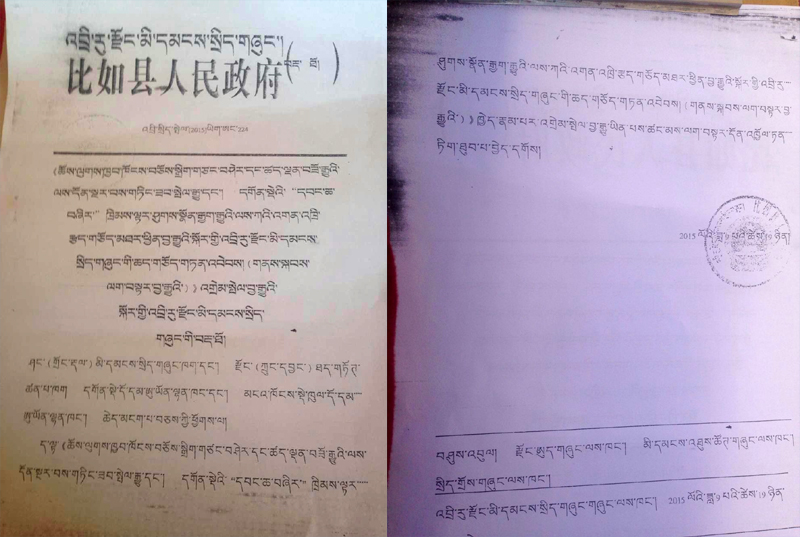 Dharamshala — At a press conference at McLeod Ganj in Dharamshala Monday, the Tibetan Centre for Human Rights and Democracy released a Chinese document allegedly leaked from Tibet, which they claim to prove the crackdown of Chinese authority on religious freedom and human rights violations in Diru (Ch: Biru) County in Nagchu (Ch: Naqu) Prefecture, Tibet Autonomous Region (TAR), in Kham province.

TCHRD said that the new rules contained in the documents targets what the Chinese see as being the Lama's influence on ordinary people, restricts the size and finances of monasteries, sets educational syllabi in monasteries, and even forbids ordinary people from carving Buddhist mantras on stones which Tibetans consider a meritorious act. Monasteries are threatened with having their religious status stripped and denial of rights to harvest Yartsa Gonbu, a local herb that has been an important source of economic activity in recent years.

The group has closely monitored the situation in Diru County, publishing accounts from local Tibetans which have suggested the authority's strengthening grip on the region. It claims this document not only proves those accounts of a crackdown, but also takes a concerning step in the oppression of the region.

"This regulation evokes the memory of Cultural Revolution when the whole structure of the society, from top to bottom, was subjected to sweeping state scrutiny and punishment," said Tsering Gyal, Tibetan/Chinese researcher at TCHRD. "Each level of the party and government offices and units, from County to village, is held responsible for any leniency in their duty to enforce the regulation."

Tenzin Nyinjey, Tibetan researcher at the exiled group recalled during the organization's press conference, "many years ago, when the Communist Party was in Tibet, they made a famous statement, saying that in order to kill a snake you have to chop off its head. Meaning that if you want to destroy the Tibetan resistance you have to target the monasteries, as they are the foundation of Tibetan culture and religion," suggesting that this document clearly shows this policy in action, years later.

Another point of concern brought up by the TCHRD is that in this instance, the Chinese authority goes beyond this initial policy to also target individual acts of religious worship, as the document threatens the economic livelihood of individuals found placing Mani stones or carving, as they will not be allowed to harvest the local's most lucrative crop. The group claims that punishing religion in this way is like "chopping off the Tibetan lifeline."