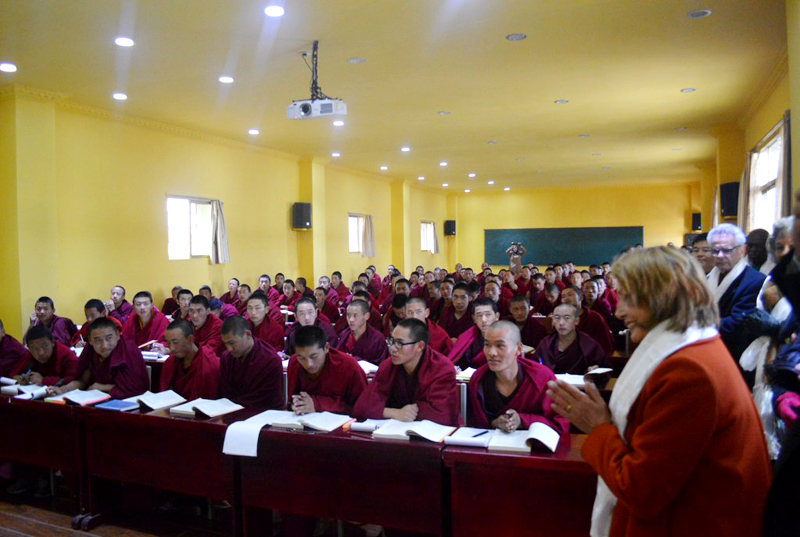 Dharamshala —Sources coming out of Tibet say that repressive measures undertaken by the Chinese government to silence Tibetan voices and obfuscate the real situation inside Tibet ahead of the US Congressional Delegation's visit which concluded recently.

The Capital city of Tibet, "Lhasa was placed under a severe lock-down in late October and early November," the Central Tibetan Administration said, citing a letter it received from inside Tibet.

"Lhasa was placed under extreme repression and the people were being constantly indoctrinated in political thoughts, using both violent and softer approaches. Free speech was also severely curtailed. So much so that people felt it difficult to even move their bodies," the letter said, describing the anguish and torment the Tibetan people went through in the days leading to the visit.

"Moreover, the usual entrance gates to Barkhor which were constantly guarded by security personnel were all of a sudden removed and replaced with new doors and lesser security," the letter said. "We were confused at first for the cause of these replacements. However, we realised their intent after learning about the US delegation's visit," the letter said, underlining the authorities' attempt to depict a relaxed environment in Lhasa to the visiting delegation.

The letter further conveyed the Tibetan people inside Tibet's staunch devotion to His Holiness the Dalai Lama and urged Tibetans in exile to follow the advices of His Holiness and preserve the rich cultural tradition of Tibet.

"Tibetans inside Tibet are going through a difficult time. However, we will never betray the country under pressure. Therefore, under the guidance of His Holiness the Dalai Lama, the Tibetans residing in the free world should exert concerted effort with renewed vigour for the Tibetan movement," it said.

"Our final hopes and aspiration rests upon the two jewels of Dharamshala: His Holiness the Dalai Lama and the Central Tibetan Administration," it added.

In addition, the party chief in TAR, Chen Guoquan also warned his party members and cadres, to avoid any appearance of any wrongdoing, just ahead of the US delegation's visit to the region, a report published by the party's central anti-corruption and discipline agency, on November 9, 2014.

'On the eve of House Democratic Leader Nancy's visit to the Tibetan capital of Lhasa, Chinese authorities in the capital ordered 10 members from each division of each township, and six members from each neighborhood, to participate in staged religious activities,' source told the Tibet Post International, speaking on condition of anonymity.

Tibetans were summoned from all sectors of the Lhasa city government jurisdiction and forced to circumambulate around the religious sites. "The monasteries in the city were also directed to organize religious activities during the three days."

Many people were paid for their participation in religious activities,' sources said, adding, it would have been very difficult for US delegation led by Nancy Pelosi to see the real situation inside the city, including status of religious freedom.'

He explained that 'before the arrival of the US delegation, all of the metal-detector gates used to scan people entering the Jokhang Temple and the police tents regularly pitched in the central Barkhor area, were removed from the area. "The U.S. delegation might have got a false impression of peace and calm in the area and in reality, the situation is very different.'

The delegation was shown a "Potemkin Lhasa City" where religious freedom and economic progress is enjoyed by all," he explained, adding that "they likely did not see any of the darker aspects of Tibetan life in the city."

Congressman James McGovern said, " I think it's fair to say that I think the Chinese government wanted to control as much of our visit as they could. And we saw what they wanted us to see. We also saw things that they didn't want us to see. we went to the meetings that the Chinese government wanted us to go to. We also visited places that we thought were important to the Tibetan people, to our constituents and to a lot of the people who have expressed concerns about human rights over the years. I think we got a good exposure."