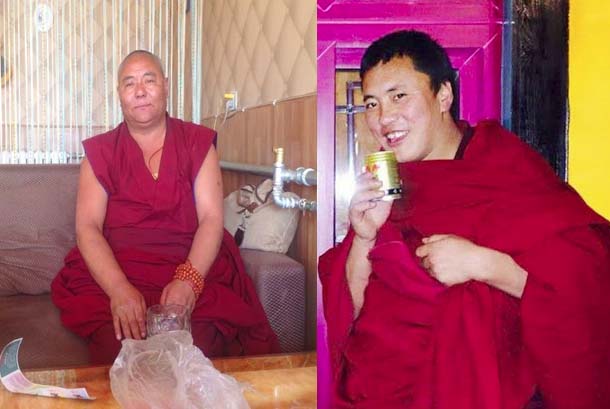 'The two were picked up by Chinese police in a separate arrest at the same monastery in Ngaba county in Amdo region of northeastern Tibet, (Ch: Aba County, Tibetan and Qiang Autonomous Prefecture in the north-west of Sichuan Province),' Losang Yeshe and Kanyag Tsering from Kirti monastery in exile told the Tibet Post International.

"Lobsang Gephel, 28, was arrested and taken away by police from his monastery on , Ven Tsering said, adding "he is being detained in the county town. No further details" were made available.

He is a former political prisoner, previously arrested in May 2011, eventually sentenced to 3 years in prison after taken into police custody for a long period. He was released early, at the end of 2013.

"Gephel is from division no. 2 of the Me'uruma pastoral district, eldest of the 9 children of father Urgyen Tsering and mother Lhamo Kyi," Ven Tsering said. He joined the monastery at a young age and is presently a manager at the medical college.

The sources said that "another monk, the 49-year old Drukdra was also arrested and taken from his room by police, on Monday night November 30, 2015." He is also a former political prisoner, arrested in 2008 and sentenced to 1 year and 4 months. He is from Soruma township.