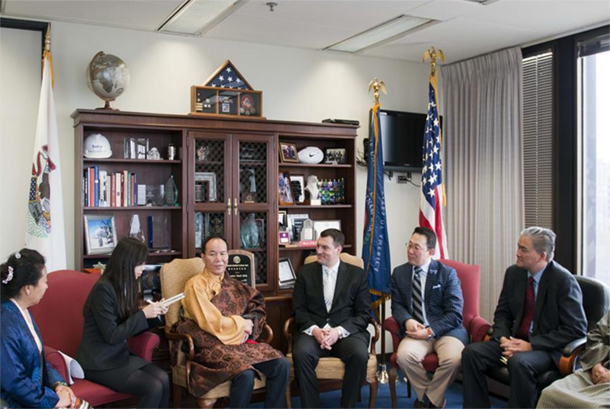 Dharamshala — A group of the Chinese Communist party "puppets" from Tibet recently visited the United States and during their meetings with the U.S. officials, they said that Tibet has always been part of China, and there is no basis for "Tibet issue."

According to the state-run Xinhua news agency, the group of Chinese government "puppets" visited Washington D.C., Colorado and Illinois on April 19-24. They were headed by Che Dalha (Ch: Qizhala), deputy to China's National People's Congress (NPC) and secretary of the CPC (Communist Party of China) Lhasa Municipal Committee.

"During the trip, the legislators met and exchanged views with people from all walks of life in the United States, briefed them on the economic and social developments in Tibet and answered questions," the report claimed.

During the meetings, Che Dalha said that China and the United States are countries of big influence in the world, and the visit is a journey of friendship, aiming to implement the consensus Chinese President Xi Jinping and U.S. President Barack Obama have reached, promote understanding and consolidate cooperation between the two countries.

Che Dalha stressed that Tibet has always been part of China, and there is no basis for so-called "Tibet issue" as claimed by the 14th Dalai Lama and his group.

He said the Tibet Autonomous Region is currently a picture of economic growth, harmony and happiness. 2016 is the start year of China's "13th Five Year Plan," and Tibetan people will work hard together with all Chinese people to ensure the target of building China into a well-off society in 2020, he added.

The U.S. officials said that the U.S.-China relationship is the most important bilateral relationship of the 21st century.

The United States accords great importance to its relations with China, and is willing to strengthen exchanges with all Chinese provinces and autonomous regions including Tibet, and deepen the cooperation in all fields between the two countries, they said.

They believed the delegation's briefing of Tibet and the achievements Tibet has made are impressive, and expressed the hope for more such exchanges in the future.

In Washington D.C. and Chicago, the group held discussions with Tibetans living in the United States, and briefed them on the poverty relief efforts, education and environment protection in Tibet.

"In 1949, great parts of Tibet were occupied by the Chinese that include Kham and Amdo Provinces. Tibet Autonomous (TAR) Region was created in 1965 on the basis of Tibet's incorporation by the PRC following its armed invasion in 1949-50," said Mr Nyima T.J. a Tibetan political analyst.

"In the past half-century, China has ruled Tibet with its failed iron fist policies in the occupied region. During this time few puppets were appointed to positions of low ranking officials. Theses officials including Lobsang Gyaltsen, (Ch: Losang Jamcan) the Chairman of TAR and Pema Trinley, (Ch: Padma Choling) head of TAR's People's Congress," added, saying "TAR does not literally mean Tibet, as China claims it, is actually a part of what constituted historic Tibet, but it literally means "Tibet Autonomous Region."