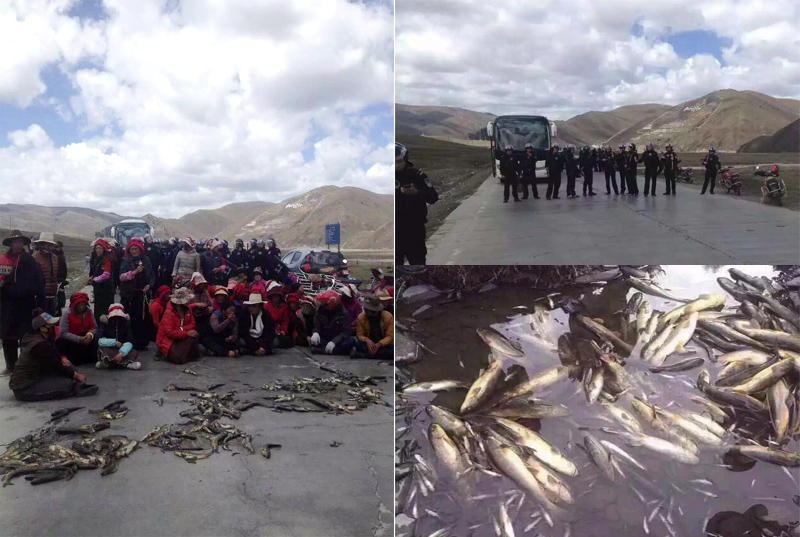 Dharamshala — More than 100 Tibetans have protested against Chinese mining operations at a site considered sacred by local Tibetan residents, drawing a large police force to the area and prompting fears of clashes.

'The protest took place at Yulshok Gargye in Minyak County, Kham Province of eastern Tibet (Ch: Minya, Kangding County, Sichuan, China)," on May 4, 2016,' Aka Penpa, a monk from South India told the TPI.

He said that "the ongoing mining has led to toxic wastes being dumped into the river resulting in the death of a large number of fishes."

"About 100 local Tibetans then gathered in Yulshok Gargye to demand an end to the project and calling for urgent action to protect environment and wildlife," he added.

The locals have engaged in shouting slogans "there is no rule of law for the Communist Party" and saying they lied to us, they cheated on us, they betrayed us and broken promises.

'Chinese authorities deployed dozens of police forces in vehicles to the protest site, immediately after the event,' TPI's source said.

"The situation is still very tense, as there are growing fears among the locals that the security crackdown, may take place in the open sky," sources said, adding: "It is also unknown whether or not the Chinese authorities arrested any of these Tibetan protesters."

Yulshok Gargye is a sacred place located in the Minyak County, less than 20 minutes walk from the center of Pa-Lhagang, which is one of the holiest site in Tibetan Buddhism.

The protest site is also located near Mt Minyak Gangkar, one of the highest mountains in Kham region of eastern Tibet, which is located near Dartsedo City. It is with elevation of 7556m. The town of Dartsedo was an important trade center between Tibet and China, and for centuries its importance lay on the tea-horse trade. Mt Minyak Gangkar is also one of the most sacred snow capped mountain in the Kham region.

Mining operations in Tibet have led to frequent standoffs with Tibetans who accuse Chinese firms of disrupting sites of spiritual significance and polluting the environment as they extract local wealth.

The operations also have caused landslide, severe damage to local forests, grasslands, and drinking water. Waste from the mines has been dumped in the rivers, and mining activities have polluted the air.