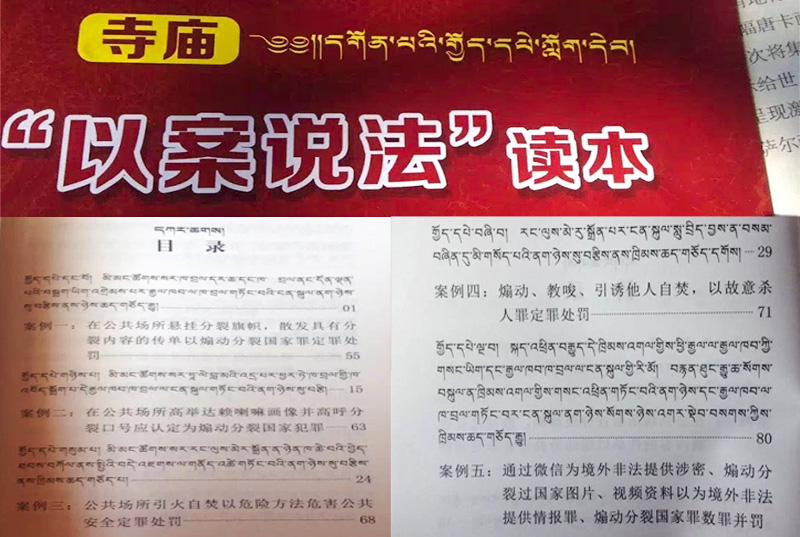 Dharamshala — Chinese authorities in Ngaba County, Amdho region of north-eastern Tibet (Ch: Aba County, Qinghai Province, northwest China) have issued a textdbook – which features prohibitions already in place against any form of peaceful protest and sharing of information from inside Tibet to abroad via social media platforms, according to sources in the region.

In a newly issued textbook, the Chinese authorities have warned Buddhist monks of Kirti monastery in Ngaba county, against staging any form of peaceful protest, including self-immolation and sharing of information from inside Tibet to abroad via social media platforms.

The leaked textbook copies obtained by the Kirti Monastery in exile– bans monks from engaging in any form of protest, including distributing "separatist" leaflets, and displaying portraits of His Holiness the Dalai Lama at any public gatherings that promote "separatist" goals or oppose China's repressive rule.

"The textbook was issued by Chinese authorities in Ngaba district, on July 28, 2016,' source said, its containing a set of decrees, criminalising all forms of peaceful protest, silent march, self immolation and the use of His Holiness the Dalai Lama's portrait, banners, posters, leaflets during protest as an act of "disrupting social stability".

The tightening of increasing restrictions on religion in Tibetan areas clearly shows the systematic compromise of the human rights of the Tibetan people by the Chinese government.

Another provision in the textbook prohibited the monks from sharing information on social media such as wechat, to the outside world, declaring it as an illegal act of "leaking state secrets" and "engaging in separatist activities."

Tibetans inside Tibet describe it as a conspicuous move by the Chinese government to justify its brutal repression of peaceful dissent,' the source said, adding that this brought to light the extreme nature of community party brutality in Tibet.

The source also revealed that the new textbook stipulates: Anyone violating these directives will be punished according to the law. Those who are inciting self-immolation will be charged with murder. Those who are using social media- WeChat to send, download or publicise images, drawing, audio or videos that contain information endorsing separatism will be severely punished according to the law under "leaking national secrets".

The textbook is titled “Monastic Legal Cases Textbook”. It has been circulated among all monks of the Kirti Monastery, who have reportedly been ordered to study it seriously.

The legal cases – roughly translated by TPI – of illegal activities and explanatory notes by the Chinese government are as follows:

Case 1: To write, announce or distribute banners, posters, leaflets, and raise the Tibetan flag at any public places that promote "separatist" goals will be considered as a crime of inciting activities of splitting the nation, Page 01.

Case 2: To raise  or carry the Dalai Lama's photos at any public places will be considered as a crime of inciting activities of splitting the nation, Page 15.

Case 3: "Self-immolation" protest will carefully be classified as criminal penalties and will be charged with "sabotaging social stability" by "using dangerous methods," Page 24.

Case 4: Those found aiding or inciting others to self-immolate, will be considered “intentional murder”. Those charged of these crimes will be punished, Page 29.

Since 2009, a total of 144 Tibetans have set themselves on fire in protest against the Chinese government's repressive policies in Tibetan areas. Many such protests have taken place in Ngaba region, especially by the monks of Kirti monastery.

However, Chinese authorities have responded to such protests with heightened repression and severe punishments to the family members of the self-immolators.

Last year in August, Dolma Kyab, 32, was sentenced to death by an intermediate people's court in Ngaba (Ch: Aba) prefecture for allegedly killing his wife, Kunchok Wangmo. Kunchok Wangmo, aged in her 30s, was believed by Tibetans to have set herself on fire in protest against the repressive policies of the Chinese government.

In a similar case, Lobsang Tsondue, who is a paternal uncle and teacher of the deceased Phuntsok (who self-immolated on 16 March 2011) was sentenced to 11 years in prison on charges of "intentional homicide for hiding Phuntsok and preventing him from getting medical treatment after he set himself on fire".