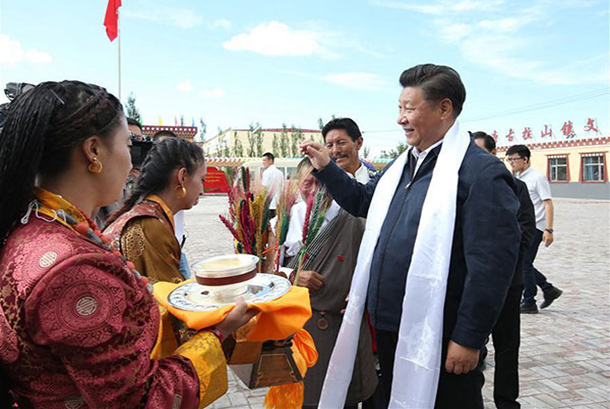 Washington, DC — The President of the People's Republic of China, Xi Jinping's recent visit to Qunhai province, the northwestern region of Tibet, suggests the party's confirmation of plans to further militarize the plateau, in addition to the exploitation of minerals and water, and the continued relocation of nomads, as a report from the International Campaign for Tibet suggests.

The report, released September 6th, just a week after the leader's trip to Qinhai concluded, suggests that the visit indicates advanced plans coming from the Communist Party.

Making a visit to a nomad settlement village during his trip, Xi Jinping reiterated the retrograde official line about removing pastoralists from the grasslands, despite the scientific consensus among rangelands experts in the PRC and internationally that the indigenous knowledge of pastoralists and herd mobility are crucial to the protection of the environment.

Xi also visited a settlement in the outskirts of Gormud, housing mainly former Tibetan nomads from the Tibetan area of Kham. More and more Tibetan pastoralists are being relocated to industrialised Gormud, where they face increasing difficulties, lacking skills or language ability to compete with Chinese workers, and leading to increasing poverty, environmental degradation and social breakdown.

Xi's visit to the biggest salt lake in the PRC, Tsakha (Chinese: Chaerhan) in the Tsaidam Basin, the ICT's report links to the new focus of the leadership on the exploitation of Tibet's lithium, in anticipation of a global boom in lithium-ion batteries for mobile phones and laptop computers, and for electric cars. Chaerhan (or Da Qaidam) lake stands out for its high level of lithium salts.

Investors worldwide, including Warren Buffett and Bill Gates, have been drawn to the lithium deposits of Tibet as part of their backing for a Chinese manufacturer, in planning to make electric cars. Nearly all of China's lithium comes from Tibet, from two areas, one of which being the salt beds of the Tsaidam Basin, where Xi visited.

The ICT's report goes on to reveal that also under the radar of coverage by the state media was the expectation that a major uranium find is now hopeful in the Tsaidam Basin, according to Chinese scientists. Uranium, needed for the dramatic expansion in nuclear power now under construction across China, has been found elsewhere on the Tibetan plateau.

There are increasingly frequent protests by Tibetans against mining in a bid to protect Tibet's fragile landscape as the Chinese authorities accelerate large-scale mining in copper, gold, silver, chromium and lithium. Tibetans who express even moderate concern about the impact of toxic waste, deforestation, and large-scale erosion risk being imprisoned, tortured, or killed.