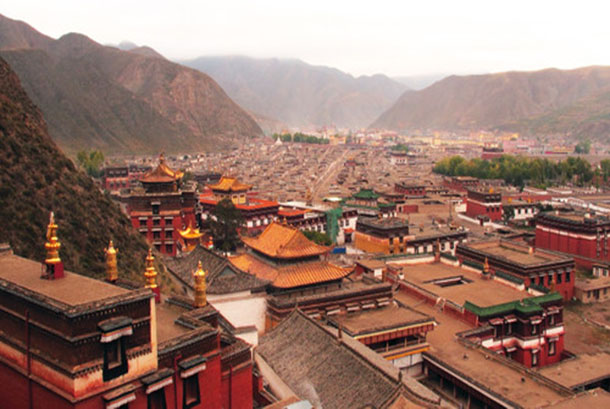 Dharamshala — The Chinese authorities in Sangchu County, north-eastern Tibet have sentenced two Tibetan monks to one year and a half each for allegedly sharing online information about events in Tibet abroad.

Jinpa was arrested, along with two other Labrang monks Kalsang and Jamyang about 7 pm, June 5, 2015, while walking in the area of market street in Labrang Township, Sangchu County, and another monk Kalsang Monlam, was also detained by Chinese police separately on the same day for unknown charges.

'The two, who are are both aged in their late 30s, were taken by Chinese authorities last year without any reason or accusation. Both Jinpa and Monlam were sentenced to serve one year and a half prison term by People's Intermediate Court Sangchu county on September 12, for their alleged involvement in the self-immolation protest of Sangye Tso on May 27, 2015,' a source said, speaking on condition of anonymity.

According to the source, 'with plainclothes security personnel came to the Labrang monastery for Monlam and took him away in handcuffs and the authorities also forced him to unlock his mobile phone and then searched his room.'

All four were residents of Labrang Tashikyil monastery in Sangchu County, north-eastern Tibet (Ch: Xiahe county, Gannan Tibetan Autonomous Prefecture, TPI source said, added that the two others, [Kalsang and Jamyang] were reportedly released after being interrogated for several days.

TPI had previously reported that there was heavy security presence at Labrang and Bora areas; in particular, Labrang Monastery and Bora Monastery, teeming with armed forces and police who closely monitor and carry out surveillance on the activities of the local Tibetans and monks in the county, a site of frequent protests against China's rule in Tibet.

Chinese authorities in Beijing have labeled the Tibetan self-immolators as "terrorists, outcasts, criminals, and mentally ill people" and have blamed His Holiness the Dalai Lama and the Central Tibetan Administration for "encouraging" the self-immolations in Tibet.