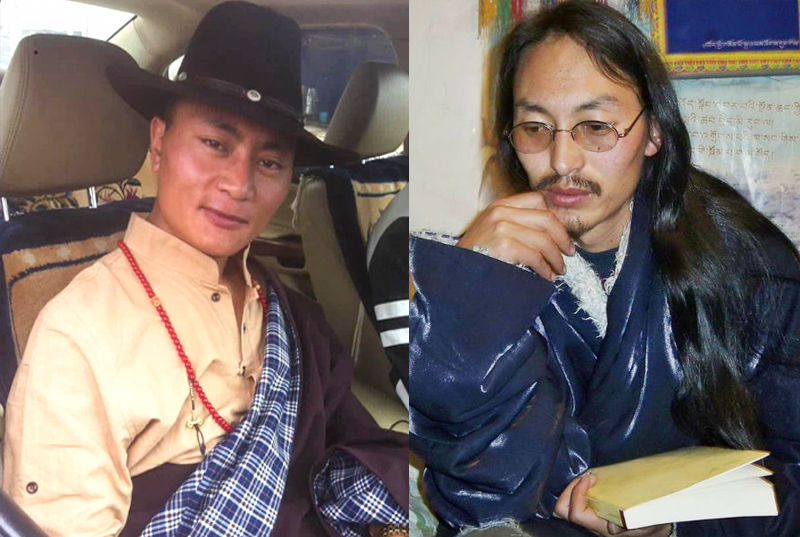 Dharamshala — A confirmed report coming out of Tibet says five Tibetans, include two writers have been sentenced to varying prison terms by the Intermediate People's court in Nyakchukha County of (incorporated to China's Sichuan Province) eastern Tibet. Two of them were re-arrested after briefly released from prison in this week.

Dubpa Kyab, who had been briefly released on September 16, was re-arrested on September 17 and interrogated after his family members and fellow villagers organized a grand welcome ceremony in his hometown in Serta County on his arrival.

The 37-year old Tibetan writer, poet, teacher and a father of two was sentenced to 5 years and 6 month in prison on September 1, 2016 and stripped of his political rights for 3 years," TPI source said, speaking on condition of anonymity.

He was first detained by Chinese police from his home in Serta County, on February 15, 2012. His house was raided and his wife, Wangchuk Lhamo, was given no explanation despite repeated appeals at the time of detention. Since then, for 17 months, his whereabouts remained unknown to family and friends until his sentencing on August 1, 2013.

Dubpa Kyab has written many essays and poems under the name of Gang Metak, poems — reveal the suffering and pain endured by Tibetans during the deadly crackdown on 2008 protests, and the hardships faced by Tibetans trapped in the web of official corruption and profiteering.

Another Tibetan wrtier, Samdup 32-year old, was also sentenced to 6 years and stripped of his political rights for 3 years. He was briefly released from prison on August 13, 2016 after serving more than four years. was re-arrested on September 18.

Yudrang was sentenced to 2 years imprisonment recently and deprived of political rights for 1 years. He was arrested, along with Samdup, on June 13, 2012. His father's name is Sonal Gyal.

Dransal was sentenced to 3 years and stripped of his political rights for 2 years. Other details surrounding his arrest, detention and release are unknown.

Another Tibetan called Shelgyal, was sentenced to 2 years imprisonment and deprived of political rights for 1 years. Other details surrounding his arrest, detention and release are also unknown.