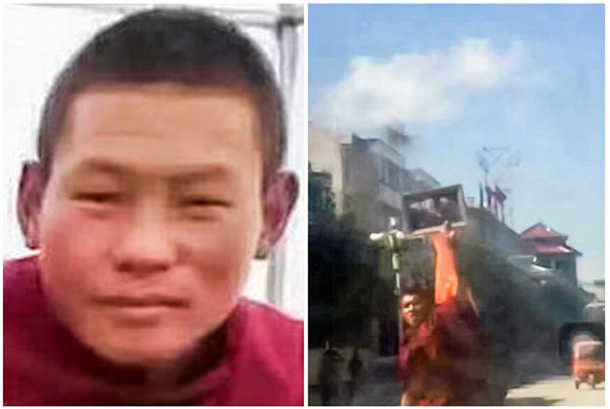 Dharamshala — A young Tibetan monk was brutally beaten by Chinese police in Ngaba County of north-eastern Tibet when they arbitrarily arrested him after staging a peaceful protest against Chinese government repressive rule in Tibet. A source says he was hospitalised next day in critical condition.

Chinese police arrested Lobsang Tsultrim after shouting slogans while walking along a street in Ngaba county's main town on October 17, at around 1:00 p.m. He was hospitalised because of injuries he suffered to his body after he was severely beaten by the Chinese authorities.

Tsultrim shouted slogans calling for "Long life of His Holiness the Dalai Lama" and "Freedom in Tibet". Chinese police arrived at the spot and immediately started beating him severely, a source with direct knowledge of the move told the TPI, on Thursday, speaking on condition of anonymity.

When Tsultrim arrived at the Tibetan Language Middle School he was arbitrarily disrupted by Chinese police," the TPI's source said, adding that the Buddhist monk is reportedly in "critical condition." A photo of his protest received from the area also shows the monk staging a lone protest by carrying a portrait of His Holiness the Dalai Lama with a traditional scarf.

According to the same source, Tsultrim was rushed to Ngaba Hospital the next day after he was severely beaten and tortured in police custody. A large number of security forces and police are also deployed throughout the Ngaga town streets and surrounding areas after the protest. The source also said that the local Chinese government has currently imposed a tight control over the movement of Tibetans, including monks of the monastery.

Arbitrary arrests and detention have increased amid unusual intensification of state surveillance measures in the region. Reports claim Beijing is isolating Tibet from the world and Tibetans face lengthy jail sentences and torture for sharing information about any protests, including the self-immolations.

Hundreds of Tibetans, including writers, bloggers, singers and environmentalists, have been arbitrarily detained or are imprisoned since 2008, after attempting to express their views or share news of the situation in Tibet with the outside world, and provides further evidence of a widespread crackdown against free expression in Tibet.

Sporadic demonstrations challenging Chinese repressive rule have continued in Tibet since widespread protests swept the region in 2008, with a verified total of 144 Tibetans have self-immolated in protests against Beijing's rule since 2009, calling for "freedom in Tibet" and "return of His Holiness the Dalai Lama to Tibet."