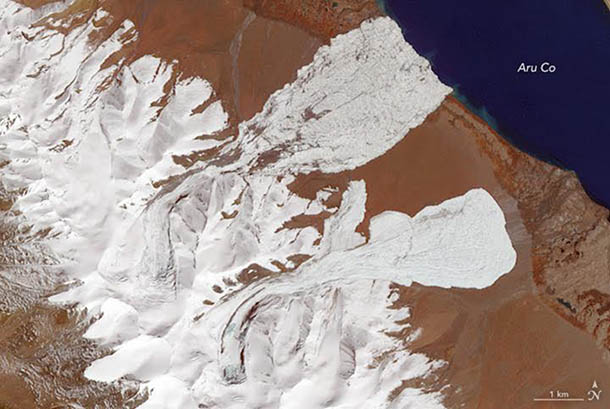 London — Two massive ice avalanches that occurred in close proximity in Tibet's Aru Range have left scientists struggling to understand what might have caused them, with one calling the occurrence "unprecedented".

The first took place in July 2016 and sent glacial ice and rock tumbling down the mountain valley, killing nine people. According to NASA's Earth Observatory, experts were puzzled by the event because the region had experienced ordinary conditions with normal temperatures and average rainfall. Adding to this, the part of the glacier that collapsed was situated on reasonably flat land.

"Even one of these gigantic glacier avalanches is very unusual," Andreas Kääb, a glaciologist at the University of Oslo told NASA. "Two of them within close geographical and temporal vicinity is, to our best knowledge, unprecedented."

Research suggests that the avalanches were possibly caused by a process known as surging. It occurs when the ice in a glacier flows down from the upper section of the glacier 10 to 100 times faster than usual.

And while there have been no documented cases of surging glaciers causing a sudden collapse, data suggests that the surging on the first glacier began at the end of last year and likely caused a large pooling of water, weakening it and priming it for collapse.

Various teams of scientists are continuing to search for a conclusive explanation for both avalanches but NASA says that long term climate change has not been ruled out.

Tibet has been suffering from the consequences of climate change for a number of years and temperatures have increased higher than anywhere else in the world. It is predicted that if the melting continues at this rate, two-thirds of the 47,000 glaciers will be gone by 2050 and nearly 2 billion people across Asia will suffer water shortages as rivers slow.

Major Chinese industrial projects such as the mining of copper, gold, silver, chromium and lithium have also taken a major toll on Tibet's environment and contributed to global warming through the destruction of vast areas of grasslands, wetlands and permafrost.

When world leaders met in Paris for critical climate change talks in December 2015 the International Campaign for Tibet (ICT) released a report highlighting the importance of Tibet's fragile environment.

Matteo Mecacci, President of ICT, said in a statement: "As talks began in Paris, both the Dalai Lama and the Beijing leadership have expressed alarm about the scale of the environmental crisis in Tibet, the 'Roof of the World'. Known as the earth's 'Third Pole', because it contains the biggest reserves of freshwater outside the Arctic and Antarctic, Tibet's changing climate not only affects the monsoon in Asia, but also weather in Europe.

"As the source of most of Asia's major rivers, including the Yangtze, the Mekong and the Brahmaputra, Tibet's fragile ecology is of critical importance to hundreds of millions of people in the water-dependent societies downstream."

In August 2015 the political leader of Tibet's exiled government, Sikyong Dr. Lobsang Sangay, also spoke of the importance of Tibet's environment and warned that ignoring issues in Tibet now could have serious geopolitical consequences in the future, including war over water in Asia.

"Tibet, known as the world's Third Pole, has over 47, 000 glaciers which provide water to rivers on which survive 1.3 billion in Asia for freshwater. NASA predicts that 60% of Tibet's glaciers will melt in the next 40 years. What will happen for these billion people if the glaciers melt at this rate? That is the biggest challenge facing us today," he said.