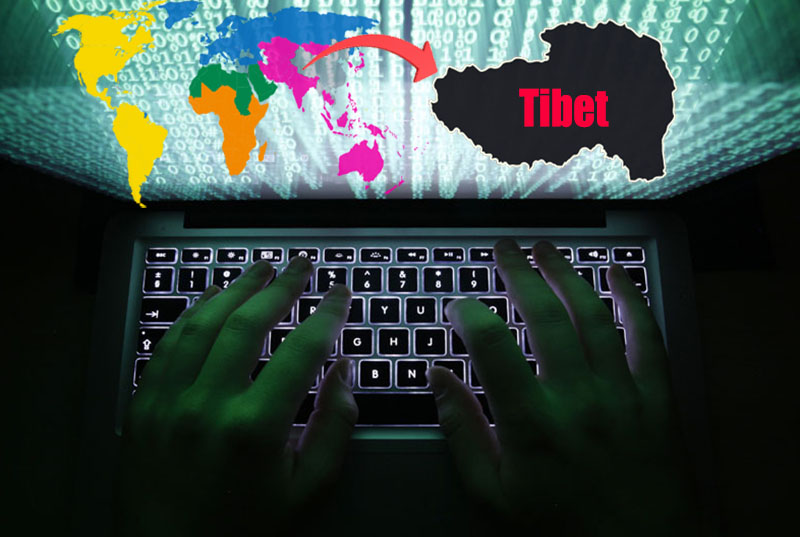 London — The Chinese government is to further restrict Internet use by adopting a new law that may have serious consequences for Tibetans who try to communicate with the outside world.

The regressive measure named the Cybersecurity Law was passed by China's Parliament on 7 November in order to combat what Beijing said is a growing threat of hacking and terrorism, but it has drawn criticism from the international community, business groups and human rights groups.

The law aims to strengthen the country's already restrictive internet controls by forcing companies to censor information the government declares "prohibited" and to support state surveillance requests. This includes requiring them to monitor network activity and provide investigative assistance to security agencies.

It will also prohibit individuals from using the internet if they are deemed to have endangered national security or said to "incite separatism or damage national unity."

The measures are a particular danger for marginalised communities such as Tibetans who are routinely labelled by the government as separatists. Charlie Smith from GreatFire, an organisation that monitors China's Internet censorship, told TPI: "China really is just taking a page from the American handbook - i.e. we can justify doing anything in the name of fighting terrorism. China's interpretation of what 'terrorist' means would be very broad and would be worded in such a way to include those who they believe are causing 'unrest' in places like Tibet."

Tibetans who have been able to bypass China's current Internet restrictions have recently been able to provide testimonies and rare glimpses of brutal crackdowns, including videos of protests at mining sites and images of destruction at the Larung Gar monastery.

But increased monitoring of Internet activity and service provider cooperation may mean sharing information will become even more dangerous than it already is, especially if the definition of terrorism or separatism continues to be applied liberally.

"With this new legislation, the world fears for what future action the Chinese authorities will take against Tibet and Tibetans," Smith continued.

"This law will be widely interpreted by many and will most definitely be used to suppress not just dissent in Tibet but also every day expressions of Tibetan culture and identity. A chilling effect will also descend over the people of Tibet, forcing them to self-censor and resist sharing images or videos that they feel might be interpreted by the Chinese authorities as being subversive."

Since then the governments of those countries have tried to legitimise this form of surveillance by saying that it will prevent terrorism and make the public safer. But multiple research projects say that mass surveillance is ineffective in preventing crimes and it has never stopped a terror attack, in fact it causes intelligence agencies to become so overwhelmed with data it makes preventing crimes harder.

The UK government hopes to soon pass into law legislation that shares a number of similarities to China's new laws, including demanding that companies cooperate with intelligence agencies. Eric King, director of Don't Spy on Us, a coalition of the most influential organisations who defend privacy in the UK, said in May: "The UK government should be leading the way in guaranteeing safe and secure communications for everyone. Instead it is providing examples for dictators and across the world."

This dangerous precedent set by the west was illustrated at the end of 2015 when western governments attempted to criticise China for new spying laws. Beijing responded by accusing the west of hypocrisy and "double-standards" saying that they too had also required companies to cooperate in counter-terrorism surveillance.

Smith added: "Post-Snowden leaks, the 'I don't care about surveillance because I have nothing to hide' attitude has been pervasive in western societies. Many Chinese also share in this attitude. I don't know how many dissidents in the United States have been "disappeared" because of internet surveillance, but in China, this is happening on a daily basis, with little or no recourse for the families of these individuals.

"The Chinese authorities are using technology to continue its campaign of human rights abuses in China and with the passing of this law, a situation that has deteriorated under the leadership of Xi Jinping will now become unimaginably ruthless."

John Jones of Free Tibet said that there has already been a number of crackdowns on internet use in Tibet: "There have been raids on internet cafes this year, and in April several Tibetans were arrested after using WeChat to discuss the Tibetan election. China wants to prevent the truth about what goes on in Tibet from getting out, and also invests heavily in its own media to sell its narrative that things are fine in Tibet."

He added that the most important aspect of a new security law will be how China chooses to enforce it: "If a new law is simply introduced with harsher penalties to dissuade Tibetans then many will simply ignore it – they don't recognise the legitimacy of the Chinese authorities and they are prepared to take the risks to oppose them."