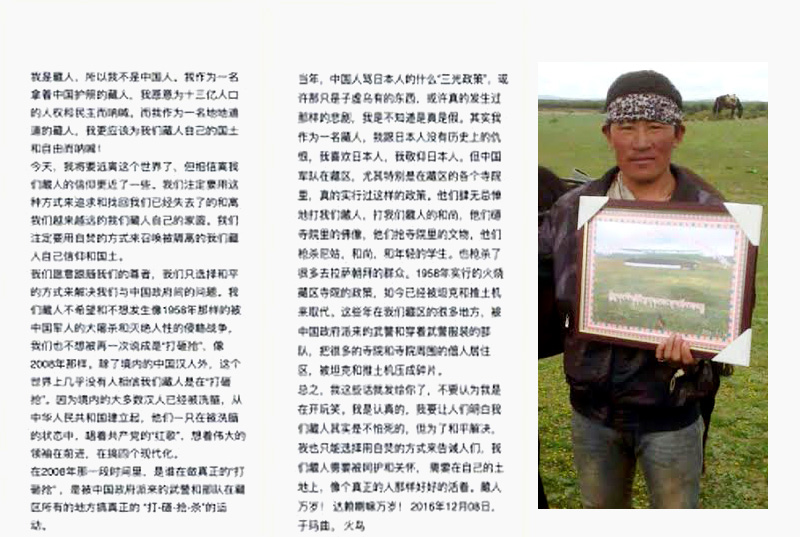 Dharamshala — Tibetan father of three Tashi Rabten, who set himself alight on Thursday in Machu County, north-eastern Tibet, died on the same day, left a letter behind which explains his actions.

The letter, dated December 08, 2016, was received by the Tibet Post International (TPI) on the next day of his self-immolation protest, and translated by Phurbu Dolma, staff writer of TPI from Chinese into English. The full letter is below:

I am a Tibetan, so I am not a Chinese. As a Tibetan with the Chinese passport, I am willing to cry for the human rights and democracy for 1.3 billion of people. However, as an authentic Tibetan, I should cry for our territory and freedom even more!

We are willing to follow our His Holiness [the Dalai Lama]. We only choose peaceful ways to solve our problem with the Chinese government. We Tibetans do not want the Massacre and inhuman invasion war by China's People's Liberation Army back in 1958 to happen again. We don't want to be called "rioters" (thugs and thieves) as in 2008.

Other than the Chinese within China, almost nobody in the world believes that we Tibetans are "rioters". Because most Chinese within China are brainwashed. Since the establishment of the People's Republic of China, they are always in the status of being brainwashed, singing the Chinese Communist Party's "red songs", envisioning the great leader is progressing, constructing the "Four Modernity".

In that period of 2008, who were really rioting? It was the Armed Police and the Chinese Army dispatched by the Chinese government that were really launching a 'beating, smashing, robbery, killing' campaign.

In the past, Chinese swore off the Japanese "Three Alls" policy (a colonial control measure). It might be purely conjecture, or it might have actually taken place. I don't know if it was real or not. In fact, as a Tibetan, I don't have hatred towards the Japanese. I like the Japanese and respect the Japanese. However, the Chinese army really executed a policy as such in the Tibetan region, especially in Tibetan monasteries.

They were recklessly beating us Tibetans, beating our renowned monks, smashing our Buddhist statues in the monasteries, and robbing the artifacts in the monasteries. They murdered nuns, monks, and young students with guns. They also murdered many pilgrims in Lhasa with guns. The 1958 policy of burning down the monasteries, has been replaced by tanks and bulldozers. Nowadays, in many places in our Tibetan region, many monasteries and monk's residences have been crushed into ruins by tanks and bulldozers from the Chinese Armed Police and the Chinese Army.

In all, my words are hereby sent to you. Don't think I am joking. I am earnest. I want people to understand that we Tibetans actually are not afraid of death. Yet, for the peaceful resolution, I can only use self-immolation to warn people. We Tibetans need to be protected and taken care of. We need to be on our own land, living like real people. Long live the Tibetans. Long live His Holiness the Dalai Lama!

Note: In case of any unintended discrepancy between this translation and its original Chinese text, the latter should be treated as authoritative and final.