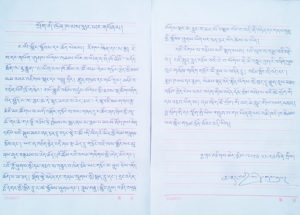 Dharamshala — “They frame us with the greatest and heaviest crimes. Under trial they coax or even force us to admit to many things we never did, an ongoing process of rendering us lifeless as a corpse, if not wiping us out altogether,” Labrang Jigme writes.

A statement of courage and resilience by a respected scholar monk, Labrang Jigme, who was recently released from prison is circulating online.

Labrang Jigme, a monk from Labrang in Amdo, endured torture and nearly died following several periods in prison. He was released in October after serving nearly five years and immediately hospitalized. A popular writer and intellectual, he is the only known Tibetan to record on video in Tibet an account of his own imprisonment and views on Chinese policies against the Dalai Lama in which he gave his full identity.

Images are circulating online of a handwritten letter in Tibetan dated November 26, 2016, in which he writes of his continued determination and spirit in the face of severe oppression.

“They frame us with the greatest and heaviest crimes, and under trial they coax or even force us to admit to many things we never did, an ongoing process of rendering us lifeless as a corpse, if not wiping us out altogether,” Labrang Jigme writes.

“You can say ‘They can do nothing to change my powers of reasoning or my innermost commitment’, but rather, for the sake of sincere adherence to the truth, I found strength, capacity, courage and endurance I didn’t know I had before, which I firmly believe to be the force of truth and reason.”

Jigme was released at night on October 26 (2016) from prison in Lanzhou, the provincial capital of Gansu, and taken by the prison authorities to his family home in Labrang town in Sangchu (Chinese, Xiahe) county. His relatives were not given permission to welcome him with a traditional ceremony and according to reports, he was not allowed to wear monks’ robes.

He was pictured wearing a blue jacket and trousers, and wearing glasses. Tibetan political prisoners are generally not allowed to return to their monasteries or nunneries after release, and Jigme was apparently not allowed to go to Labrang.

According to a relative in exile, Labrang Jigme qualified for a release in 2015, under regulations that state that according to work results and good behavior, a prisoner can be released earlier. But because he refused to sign an official document, he was kept in prison for longer and was released two months after his five-year sentence expired on August 20 (2016) following his detention in 2011.

Jigme Guri, who is in his mid-forties, had been detained again when he was in Tso (Chinese: Hezuo) city, Kanlho Tibetan Autonomous Prefecture in Gansu province in August, 2011. Two Chinese lawyers appointed by Jigme Guri’s family travelled to Tso, the prefectural seat, to take up the case, but were told that the hearings had already taken place six months previously, handled by two local attorneys. The court informed them that Jigme’s Guri’s crime was “‘Suspicion of instigating anti-nationalist separatism’”.

In the video about this experience, Labrang Jigme (also known with the honorific ‘Akhu’ Jigme and Lama Jigme) talks to the camera for 22 minutes, giving a calm and clear account of his detention and interrogation and his views on broader Chinese policies and state hostility towards the Dalai Lama.

In his video he states: “I, as a witness to truth, am telling through the media the story of Tibetans killed, who have suffered torture in prisons, and about the countless people who have been forced to flee to the mountains and who are too afraid to return to their own homes, so that the media can truthfully report on these situations.”

A full translation of the text of the note, which was written a month after his release from his most recent prison sentence, is below.

Coming back to life again after facing death
If my courage and determination wane, my affection and loyalty to my people, my hope and vitality, is my support and reason to go on. The means they use to crush us are many; fear and misleading, lies and deception, but in short, anything from stern wrath to deceptive smiles, and they have become expert at this. Apart from just deceiving the public, they frame us with the greatest and heaviest crimes. Under trial they coax or even force us to admit to many things we never did, an ongoing process of rendering us lifeless as a corpse, if not wiping us out altogether. You can say: “They can do nothing to change my powers of reasoning or my innermost commitment”, but, for the sake of sincere adherence to the truth, I found strength, capacity, courage and endurance I didn’t know I had before, which I firmly believe to be the force of truth and reason.
While the altruistic devotion that binds me to my people, my love for my country, my hopes for my kinfolk stand as firm as a mountain, unshakeable, to endure all hardship for the peace of the world, the growth of the nation, mindful wellbeing and so on is the pledge of my truth-affirmed life. The candle of life may be blown out, the flagpole of life-force cut down, but my dying testament and the living breath of my innermost counsel is this.
Labrang Jigme
November 26, 2016