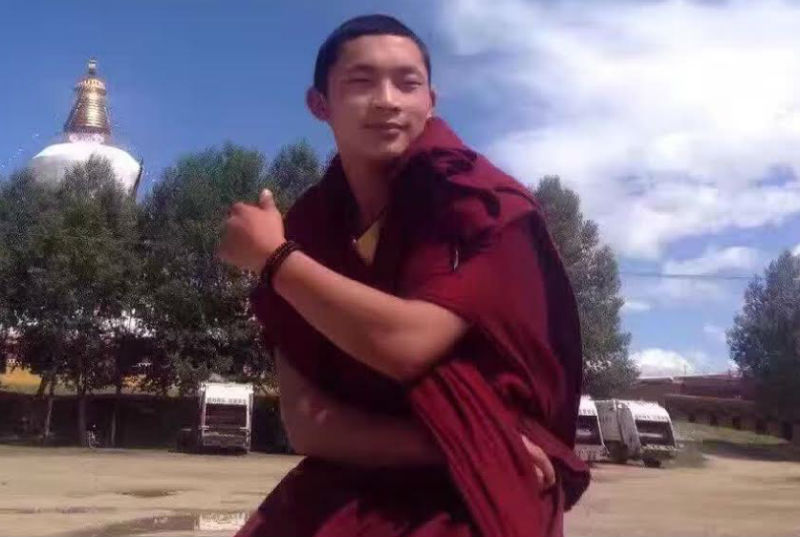 Dharamshala — A Tibetan monk was arrested by Chinese authorities in Ngaba County of north-eastern Tibet, following a peaceful protest against China's occupation of Tibet. His current whereabouts are unknown.

"Lobsang Dhargye, a young monk from Kirti monastery, marched into the streets of Ngaba County and shouted slogans against Chinese repressive rule in Tibet," a Tibetan living in exile told the Tibet Post International (TPI).

"Chinese police arrived at the scene barely a few minutes into his protest and arrested him severely. His condition and whereabouts remained unknown,' TPI's source said, speaking on condition of anonymity.

Dhargye had reportedly left a note on his social media before staging protest, urging Tibetans not to forget the "316", saying "why today was a day", we should never forget: Never forget "A Day Of Bloodshed," for the sake of the 'victory for a people and a nation.'

He marched into the street of the County, shouted slogans, at 10:45 a.m. local time, March 16, 2017, apparently protesting against the Chinese occupation of Tibet. just days after thousands of Tibetans and supporters of Tibet marched into cities around the world to the 58th anniversary of Tibetan National Uprising Day.

Ngaba County of Tibet is (Ch: Aba county, under the administration of the Ngawa Tibetan and Qiang Autonomous Prefecture, Sichuan Province) the center of the wave of Tibetan self-immolation protest against China's rule in Tibet. It is under close supervision by the People's Armed Police. The monks at Kirti monastery have long been restive, engaging in peaceful protests.

A self-immolation of a monk occurred on March 16, 2011 and several other monks, some of them very young later attempted copycat the Tibetan self-immolation protests, at exactly same date, untill 2014.

Sources say that the Kirti monastery's population declined from 2,500 to 600 in March 2011 because of a crackdown on political and other so called "illegal" activities. The monks shouted slogans calling return of His Holiness the Dalai Lama and freedom for Tibet, while setting themselves on fire, but independent media did not have access to the area.

It commemorates the day in 1959 when Tibetans rose up in Lhasa, Tibet's capital, to protest against the Chinese occupation and oppression and to mark His Holiness the Dalai Lama's flight into India. Participants were holding a banner that displayed photographs of more than 140 Tibetans who, since 2009, self-immolated to protest the repressive Chinese occupation.