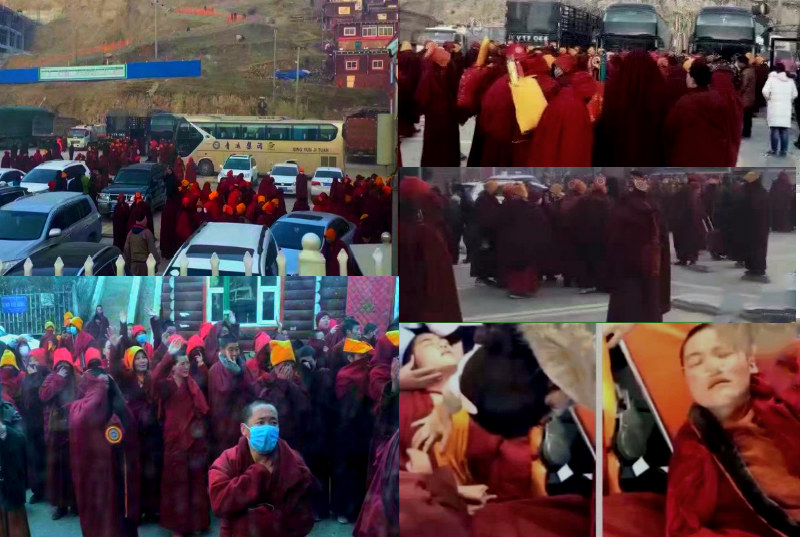 Dharamshala — American freedom watchdog, Human Rights Watch released a statement on March 29th urging Chinese authorities to halt the expulsion and political re-education of monks and nuns from a major Tibetan religious institution. According to information from an abbot of the institution, Chinese officials announced days ago that 3,225 homes at Larung Gar, the world’s largest Tibetan Buddhist institution, would be torn down by April 30.

Many of the monks and nuns already expelled from Larung Gar and the nearby religious community at Yachen Gar, both in Tibetan areas of Sichuan province, have been forced to return to the Tibet Autonomous Region (TAR) and subjected to exceptional restrictions on their liberty and to degrading treatment. In November 2016, the authorities forced at least one group to undergo political re-education and apparent public humiliation in Nyingtri (Linzhi in Chinese), in southeastern TAR.

“Those who have left had never wanted to leave,” he said. “All left against their own wish. And whether or not they had some place to go, they still had to leave.”

“China is aggressively dismantling religious freedom along with religious life at Larung Gar by subjecting many expelled monks and nuns to forced re-education,” said Sophie Richardson, China director at Human Rights Watch. “The restrictions imposed on former residents should be removed so they can exercise fully their rights to religious practice, including freely joining religious institutions and observing religious rituals.”

In November 2016, seven experts from the United Nations wrote to the Chinese government requesting detailed information regarding the mass expulsion of Tibetan, Chinese, and other monks and nuns from the monastic settlements at Larung Gar and Yachen Gar. The statement also asked the government to provide information about the legal grounds for the demolitions and expulsions, and what steps had been taken to resettle or rehouse those made homeless. It also requested an explanation about the reported lack of consultation with local religious leaders, the rationale for involving government officials in monastic affairs, and what steps authorities would take to ensure the right of religious freedom.