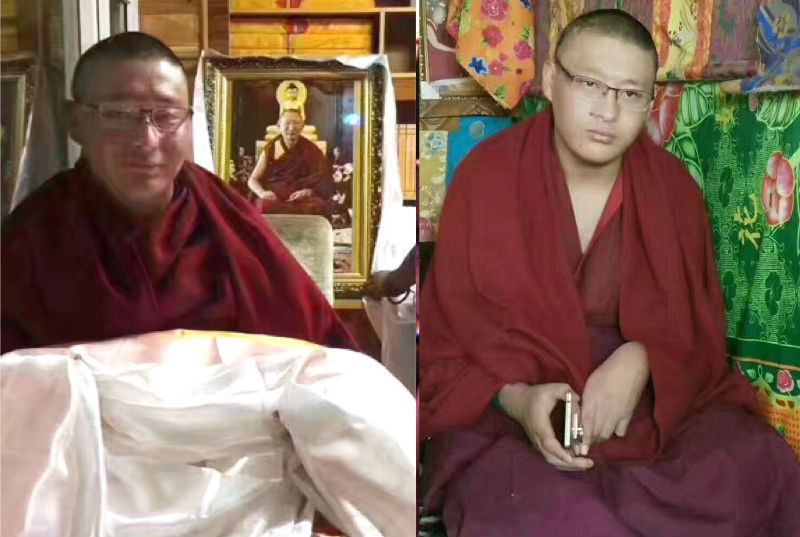 Dharamshala – A young Tibetan monk who set himself on fire in protest against Chinese rule, while calling for freedom in Tibet and His Holiness the Dalai Lama’s return to Tibet, was released from prison last month with one of his legs amputated.

Lobsang onchok was detained by Chinese security forces on September 26, 2011 when he, was 18, along with another monk, Lobsang Kalsang, 19, jointly staged a self-immolation protest in the Ngaba County township of eastern Tibet.

Konchok was released from "Defang Prison" in China's Sichuan Province, on March 28, 2017," sources told TPI on April 2nd, adding that "he is reportedly now under heavy surveillance at his home in Meruma Town, Amdho region, Tibet."

Six years after his self-immolation protest – with one of his legs amputated, according to the sources. "No information is available about whether the amputations were medically necessary or not."

Konchok and Kalsang are monks the local Kirti Monastery, Ngaba County, according to sources. The monks set themselves on fire in 2011 while shouting slogans against the communist regime's bloody suppression in Tibet.

Konchok's condition was reportedly critical during his time in prison, sources said, speaking under condition of anonymity. His family was informed that his legs and arms would be amputated at "a Chinese government hospital." Sources also said that his treatment was said to be "discriminatory and hostile". Hospital staff would make disparaging remarks that he was the "enemy of the country" and "enemy of social stability".

On January 28, 2013, Konchok was given a suspended death sentence, and his nephew Lobsang Tsering was sentenced to 10 years in a false allegation link to the self-immolations with no proper trail and process.

Sources say it remains unknown on what charges Konchok was imprisoned. Locals believe that he was charged of endangering public security, as the Ngaba local government directive issued in May 2016.

Sources said 'there is no information on Kalsang. He has not been heard or seen since his detention at the site of self-immolation protest.' Kalsang is the brother of Phuntsok Jarutsang, who burned himself to death on 16 March 2011 in protest against China's repression in Tibet.

A total of 146 (verified) Tibetans have burned themselves in market places, main streets, military camps and other symbols of government authority in Tibet, mostly in a single remote county, in one of the biggest waves of political self-immolations in recent history.

Out of the 146, 126 have died while the status of the rest remains unknown or critically injured. Most of the self-immolators have called on the Chinese government to allow the return of His Holiness the Dalai Lama to Tibet and freedom for Tibet.

Each immolation has prompted Chinese authorities to heighten the security that has smothered the area since 2009, after a national uprising against Chinese rule in 2008. The security cordon has kept foreign journalists out. Searches of Tibetans and Internet and mobile phone service suspensions keep the message from spreading.

The Chinese authoritarian regime in Beijing has blamed "outside forces" for the self-immolation protests, particularly His Holiness the Dalai Lama and the Central Tibetan Administration (CTA)- regarded by China as a subversive.

But, the Tibetan government in-exile has denied 'such accusations', saying that the main cause of self-immolation protests is "Beijing's hard-line policies", including political repression, economic marginalization, environmental destruction, cultural assimilation and denial of religious freedom."