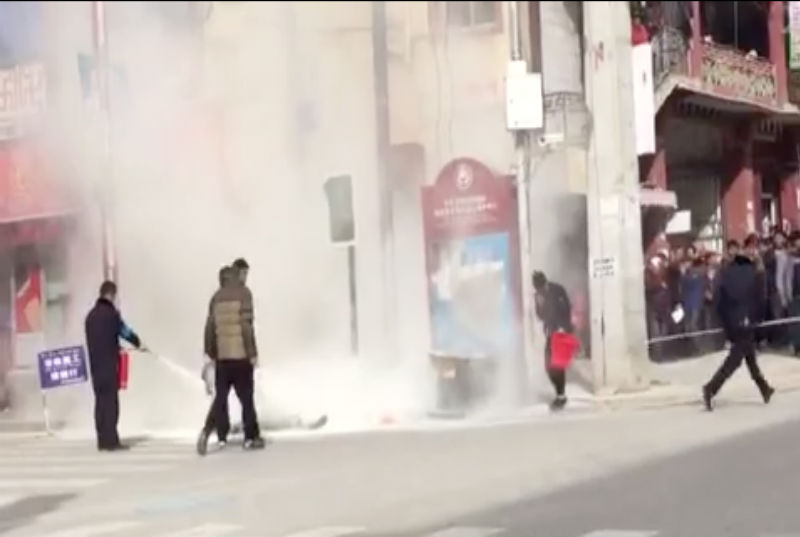 Dharamshala — In reports coming out of Tibet, yet another Tibetan man set himself on fire Saturday in Karze County of Kham region, eastern Tibet in continued protest against China's occupation of Tibet.

"Wangchuk Tseten, a 30-years old layman, from a nomadic family, set himself on fire at the main market square of Karze county, (Ch: Garze Tibetan Autonomous Prefecture, Sichuan province) on April 15, 2017, before 8:00 am (local time) in protest against the China's repressive rule in Tibet," a Tibetan monk living in exile told TPI, speaking on condition of anonymity.

"Chinese police arrived at the scene barely a few minutes into his protest and extinguished the fire. He was immediately taken away by police to an unknown location. Maybe no one had a chance to take a photo of the latest self immolation protest," sources told TPI on Monday morning, citing local contacts.

Chinese authorities remove Tseten's body in critical condition. His present whereabouts and condition, including whether or not he survived, are currently unknown," sources said. Testen hails from Drongtul area, Ase village in Nyakrong Shidhoyulshog, eastern Tibet.

Shocking new video that smuggled from Tibet on March 19, shows the self-immolation of a 24-year old youth Pema Gyaltsen on the street of the Karze County on March 18, in apparent protest against China's rule over the restive region,' another souce told TPI, following some media reports initially hurried up by providing the footage as an evidence of a Tibetan monk's self-immolation protest.

The new footage, which also showed Chinese riot police spraying fire extinguishers on what appeared to be Tibetan self-immolator Gyaltsen's smoking body lying on the ground, while other policemen chased the crowd with batons forcing to disperse them across the streets.

A Tibetan in Exile who also asked that TPI not use her name said 'she had two separate footages of Gyaltsen's immolation. The first was reached on March 18, the same day as Gyaltsen staged self-immolation protests in Tibet while other footage smuggled out of Tibet on the next day, March 19, 2017.'

Following self-immolation demonstrations by two Tibetans in last two months, China has imposed a security lockdown in the county and surrounding areas. Tibetans in the area has been heavily restricted and surveillance stepped up. Locals are thoroughly investigated and their IDs issued from Chinese government offices carefully checked. However, TPI still cannot immediately confirm the other details of latest new footage.

Tseten is the second Tibetan to carry out a self-immolation protest in 2017. The last self-immolation in Tibet was carried out by Gyaltsen in the same county of eastern Tibet, on March 18, 2017.

"Therefore it is time the Chinese Government heed to the calls of Tibetans in Tibet who long for freedom in Tibet and the return of His Holiness the Dalai Lama back to Tibet. China must address the legitimate grievances of people in Tibet," Sikyong added.

The latest political protest brought the total verified number of self-immolations in Tibet to 147 since February, 2009 and and of them more than 115 were reportedly passed-away due to their severe injuries.

Chinese government says Tibet has always been part of its territory, but Tibetans say Tibet was an independent nation for centuries until Chinese troops invaded, starting in 1940s.