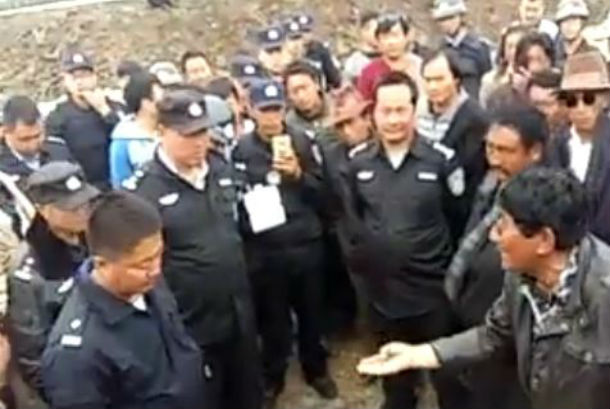 Dharamshala — A Tibetan man who was leading protests against Chinese mining operations in a restive Amchok Sangchu county in Tibet has reportedly died after being severely tortured in Chinese police custody.

On June 1, 2016, Tsewang Kyab, an elderly local leader from Angon village, Amchok County, was detained by Chinese police at Khelpa village, Amchok township where he was severely tortured and rushed to a hospital in the Chengdu city.

Sources said that "shortly after being released from Chinese police custody on June 5. He has suffered from a serious illness over a year, both physically and mentally," Ven Sonam, a resident of Swiss, told TPI Saturday.

"Tsewang Kyab passed away at his home, at approximately 11.15am on April 25, 2017," sources said, adding: "Tsewang Kyab hails from Angon village of Amchok County, northeastern Tibet. "

About three hundred Tibetans protested against the Chinese gold mining in Achok Yultso township of Sangchu county, Amdo region of north-eastern Tibet, on Tuesday morning, May 31, 2016.

Chinese police attacked a crowd of Tibetan villagers June 1, 2016, after the hundreds of Tibetans, residents of a township near a sacred mountain, strongly protested the mining of gold at the holy site, by Chinese government. Six of the protest leaders were brutally beaten and detained by police, one of them, Tsewang Kyab who was seriously injured and was rushed to a hospital in Chengdu city, while the other five were taken to a nearby hospital," sources said.

A video footage smuggled out of Tibet, depicting local Tibetans confronting Chinese police forces, and calling upon authorities to discontinue the mining. Tsewang Kyab holding a book in the background, looks like an Environmental Protection Propaganda, speaking in the video can be heard, urging police to "Stop the destruction of the environment."

Residents of eight villages in Amchok County later gathered on June 4 in an open area to burn incense and carry on their protest against the mining on Gong Ngon Lhari mountain, "Many armed Chinese police arrived at the site and surrounded the Tibetans, and tensions began to build. But on the advice of senior religious figures who were present, the Tibetans abandoned their protest."

The protest in Amchok began on May 31 and followed 15 years of frustrated appeals to authorities to halt the mining on the mountain, which has been regarded for generations as a sacred site by the township's cluster of eight villages, source told TPI in an earlier report.

Received by the TPI, a symbolical drawing shows the sacred mountain of Nyenchen Gong-ngon Lari with a big Chinese excavator, which causes heavy environmental destruction. The drawing with words written in red, white and yellow, also called on the Chinese authorities to stop mining operations, saying their activities are "Arrogant, Illegal, Destruction And Selfish."

The Central Tibetan Administration says "Tibet was historically an independent nation and a great empire which at one time extended to China, central and south Asia. But it is now under occupation of China and there is political repression, economic marginalisation, social discrimination, environmental destruction and cultural assimilation."