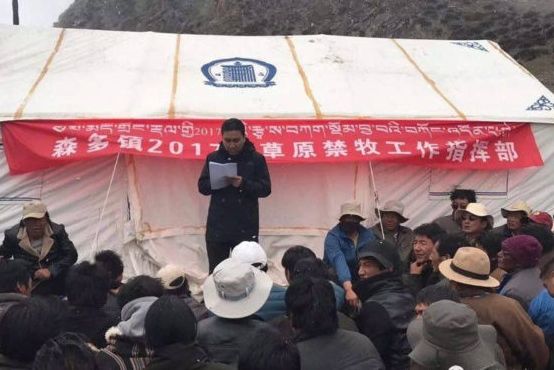 Dharamshala — Reports from inside Tibet indicate that Chinese authorities have banned nomads in the northeastern region from their traditional grazing ground, fining and even jailing those who refuse or disobey.

According to the reports, no explanation was given for the order to move from the pasturage in Golog prefecture’s Darlag county, or for the expulsion of another nomad group from their nearby winter camps.

The affected locals have written an appeal, addressed to “The respected senior leaders of the People’s Republic of China, and concerned departments”, where the nomads oppose the authority's orders on 6 grounds, calling it unconstitutional, stating, “Taking away citizens’ rights to pastureland is against the constitution, against national and local laws, and a major cause of damage to People’s’ livelihood and way of life.”

Authorities set a deadline of August 23 for the nomads to move, and though most were able to leave by the assigned date, according to a source speaking to Radio Free Asia, “some did not meet the deadline,” the source said.

“So the officials brought in armed police to threaten the nomads who remained, finally forcing them from the land and fining each of them 1,000 yuan [U.S. $152] for failing to obey the order."

"They were also told that anyone still left behind would be jailed.”

Nomads living in the Horkor and Takor villages of Dernang township in Darlag county have also reportedly been ordered to relocate from areas prepared as winter camps, leaving the traditional herders with no where to go.

It has been the custom of Tibetan nomads for hundreds of years to release their livestock into the grassland for summer grazing annually around June. While no explanation was given by the authorities for the recent bans in these areas, according to Tibetan sources, Chinese officials frequently claim that the grazing bans, pasture closures, and nomad removals are a scientific necessity in order to grow more grass, capture carbon, and protect watersheds, although the nomads refute that case.

The petition states: “It is said rearing of cattle should be abandoned to protect the environment. In general, to protect the environment, mining, which drains the vitality of the earth and causes the vitality of the creatures living on it to dwindle, and all the construction and factories that pollute the air, need to be prevented and stopped... In such places, to abandon cattle rearing to grow grass and having pastoralists give up rearing cattle and altering their means of livelihood is inconsistent with natural reality and scientific fact. That cattle rearing does not harm the natural environment is corroborated by the experience of the nomads themselves.”

Indeed, across Tibet, large-scale mining efforts of copper, gold, silver, chromium, and lithium has become the norm, integrating the region into the Chinese industrial economy, and leaving devastating environmental destruction. Tibetans who oppose the mining risk being imprisoned, tortured, or killed.

Inside Tibet, Qinghai province was the first to officially enact PRC policies of nomad re-settlement, forcing tens of thousands of Tibetan pastoralists to slaughter their livestock and move into newly built housing colonies in or near towns, abandoning their traditional way of life.