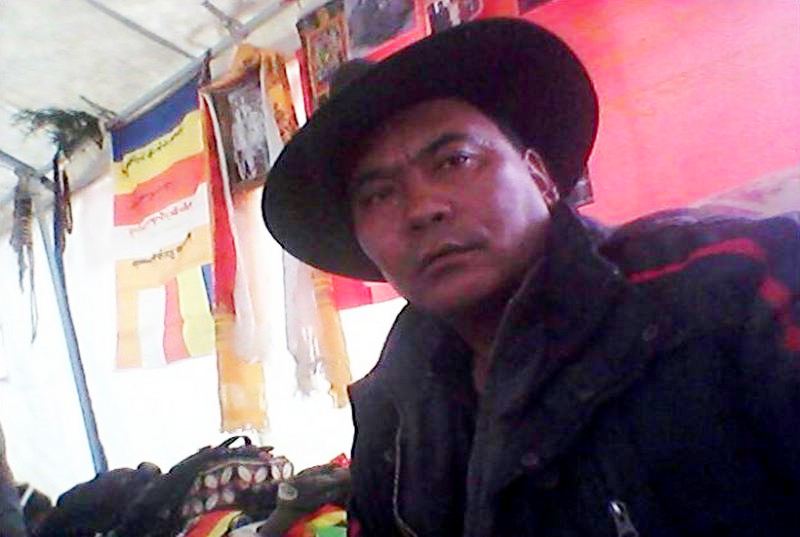 Tsegon Gyal, 55, was sentenced on January 10, 2018 by the People’s Intermediate Court in Tsojang, northeastern Tibet (Ch: Haibei Tibetan Autonomous Prefecture) and was taken to a prison in Qinghai’s capital Xining to serve his prison term, sources said.

“Before he was sentenced, he was allowed to visit with his family for the first time since he was taken into custody more than a year ago,” the sources said, citing sources in the region and speaking on condition of anonymity.

First detained on December 9, 2016, Gyal was held for eight months in Qinghai’s Kangtsa (Gangcha) county and then tried on May 3, 2017, the source added.

“The Tsojang People’s Intermediate Court put him on trial in secret, with no notice given to his parents or relatives,” the source said, adding, “The Chinese government didn’t follow due process or allow him a defense attorney.”

No explanation was given for the long period of time that passed between Gyal’s trial last year and his sentencing last month.

Gyal had most likely been charged because of a blog post he had published criticizing China for implementing a restrictive policy of “ethnic unity” in the Tibetan areas under its control, an exile rights group TCHRD said in a statement issued on February 18, 2018.

“Successive policies and campaigns implemented by Chinese authorities have shown that the unity promoted among ‘ethnic groups’ is essentially aimed at diluting the distinct cultural and religious identity of Tibetans and other so-called ethnic groups,” the group said.

Formerly a freelance journalist for newspapers and other media outlets in Qinghai, Gyal also founded a performing musical group for Kangtsa county residents with disabilities which he was later required to hand over to Chinese authorities for management, the sources further said.

“In 2015, he offered free food to pilgrims coming to Qinghai Lake from all over Tibet,” he said. On December 29, 2016, Chinese authorities charged the prominent political prisoner of ‘inciting to split the country’ (煽动分裂国家罪) after holding him incommunicado for more than two weeks at Kangtsa (Ch: Gangcha) County Detention Centre in Tsojang (Ch: Haibei, ‘Tibetan Autonomous Prefecture’ in Qinghai Province), in the province of Amdo, eastern Tibet.

China has jailed scores of Tibetan writers, artists, singers, and educators for asserting Tibetan national identity and civil rights since widespread protests swept the region in 2008. Tibetans in Tibet are being severely beaten, imprisoned, tortured and killed for their faith and culture preservation.

In an effort to crackdown even harder on Tibetans, including writers, artists, intellectuals, and cultural advocates who criticised the government's policy, Tibetans are sentenced to death or life imprisonment for only sharing news about Tibetan protests, including self-immolations with Tibetans abroad.