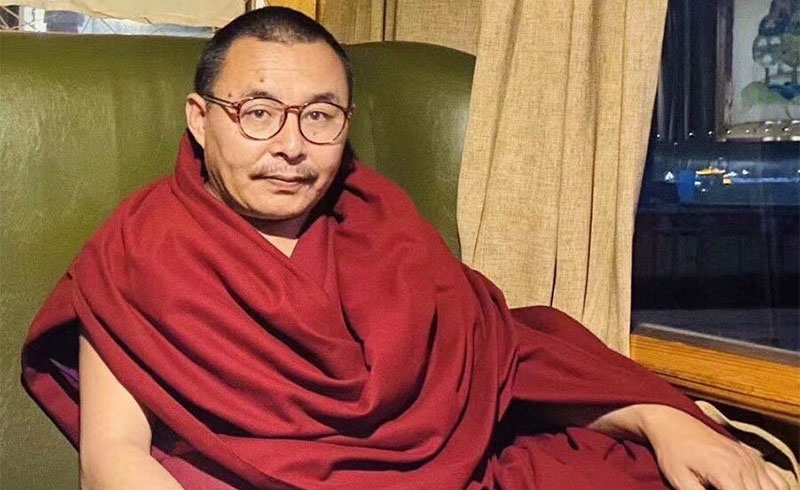 Dharamshala, India — Gendun Lhundup is a 46-year old Tibetan writer and poet hailing from Rebgong County in Amdo province of north-eastern Tibet (Ch: Tongren County, Qinghai, China) has been arrested by Chinese police on December 2, 2020 for allegedly raising his voice in freedom of authors and artists to exercise their thoughts freely according to a source.

According to a Tibetan in-exile, Lhundup a former monk at Rongwo monastery in Rebgong is said to be a vocal person when it comes to his culture, language and basic Human Rights. He was confined at an unknown location after his arrest on December 2, 2020.

He has been long committed in preservation of Tibetan culture and language. He has been behind the bars several times previously for the same reason. He has been under Chinese surveillance for a long time. A couple of days ago, Lhundup expressed his demand on the internet that authors and artists should have freedom to express their thoughts and feelings without fear of repression. People believed that might have been the cause of his imprisonment.

Lhundup was born in 1974, at Dhowa Town, Rebgong County of Amdo in north-eastern Tibet. His pen-name is ‘Lhamko’ meaning shoes. He started writing Tibetan essays in 1994. Some of his well-received creations are ‘black beads’ , 'songs of life’, ‘the white scripted book’, ‘poetries of great lords’ etc. He started teaching in Rongwo monastery from 2000 onward. Won many eminent prizes and frequently recommended by others for counterchecking of books and teaching.

“Reports of his arrest are being widely discussed on social media with many criticizing communist China’s regime for his detention”, the source confirmed. The 46-year-old writer has been detained several times in the past, as reported by the unnamed source living in India. “He has a profound interest in the preservation of Tibetan culture and has worked tirelessly for the cause of Tibet”, the source further explains that the poet’s work has been well received by both Tibetans inside and outside Tibet.

In October, Lhundup released an anthology of poems called “Khorwa” and contributed on the website “Waseng-drak” that promotes freedom of expression for writers and artists without restriction. Although his own freedom to express his opinions was restricted, Lhundrup promised to follow his heart and continue writing and asked for his readers support, as mentioned by the source.

The 46-year old monk is not seen nor heard of after his confinement by the Chinese police. His whereabouts, condition of his health, specification of his prison-term and location of his detention so far.

Lhundup is not a single case where the Communist China has pressured, confined and violated Tibetans for simply exercising freedom of speech and basic Human Rights in occupied Tibet. Language advocates, singers, writers and other Tibetans have been under China’s constant surveillance and subject of long-term imprisonment for speaking out against the repressive policies of the communist regime of China.