Dharamshala: On August 12 at 1100, two monks from Lithang county town, eastern Tibet, began a demonstration in which they publicly displayed photos of His Holiness the Dalai Lama.

As the monks walked from Trung Trung Karmo market to the vegetable market, bystanders were reported to hear them shouting, "Long live His Holiness!". Local police came to the scene and attempted to arrest the monks but were obstructed by onlookers.

Details of the incident were reported to The Tibet Post International by Sermed Lobga, a Tibetan monk residing in south India, who spoke with contacts from his home town. He told us the Chinese authorities in Lithang use many CCTV cameras to survey the public, and it is likely that the two demonstrators will be identified and arrested.

Sermed Lobga has detailed information about the monks' identities, which he is unable to divulge for fear of reprisals. 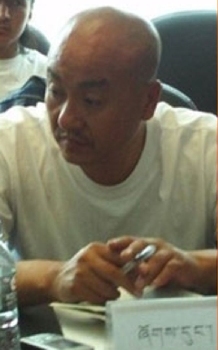 Beijing: The Tibetan writer and intellectual Tragyal - pen name Shogdung - has expressed fears that he will be executed by the Chinese authorities for his anti-Beijing write-ups. He was arrested in April publishing the book The Line Between Sky and Earth, reports Asian News International.

Dhasa: 127 people are reported dead and 2,000 more are missing after devastating overnight floods and landslides hit Drugchu (Chinese name: Zhouqu), the most easterly county town of the so-called Gannan Tibetan Autonomous Prefecture, in Gansu Province, according to Chinese state media.
Thousands of military personnel and workers are trying to rescue those trapped under vast amounts of mud and rock, after half of Drugchu town, home to approximately 45,000 Tibetans, was submerged under water.
Xinhua, the Chinese state-controlled news agency, reports that 700 survivors have been rescued by residents whilst 45,000 have been evacuated.
Torrential rain began late on Saturday (August 7) and by last night the area was witness to the worst single flooding incident in both China and Tibet this year, as landslides flattened large expanses of land and 300 houses collapsed.
Many roads leading to the area have been cleared and power in some parts of the county has been restored. However, regional media reports predict further cloudbursts for Tuesday and Wednesday.
Another report on August 8 stated that the Red Cross Society of China has sent emergency relief worth 320,000 yuan (47,000 US dollars) to aid the relief work by its local branch.

Dhasa: Over 113 people, including three Tibetans, are dead and 500 more are missing after a mudslide devastated Leh, in the Ladakh region of Jammu and Kashmir, India, yesterday (August 6). A full rescue operation is under way and workers continue to search for survivors, amid fears that the death toll could surpass 500, after torrential rain hit the Himalayan region.
Choglamsar, located 5km from Leh, is believed to be one of the worst hit villages, where over 200 people are still reported missing. Villages along the Chang La pass, the world's second highest motorable highway, are also believed to have been swept away by the flash floods. The Leh-to-Manali road should be reopened within a couple of days as heavy earth-moving equipment has been called into service. The road, one of only two lifelines to Ladakh, is a vital access route for material relief, food, fuel and military supplies.

Dharamshala: The Tibetan Parliament-in-exile and the Kashag (Cabinet) of the Central Tibetan Administration have expressed their deep condolences for the victims of the floods and subsequent mudslides that hit Drugchu region, northeastern Amdo province of Tibet, on Sunday.
The death toll has risen to 337 according to Chinese state media and 1,148 people are still missing as rescuers race against time in search of survivors.
A message from the Tibetan Parliament offered their prayers to those injured in the tragedy and for the deceased, for whom they pray for the attainment of an early rebirth. They also spoke of their fears for those who continue to live in the low-lying areas of the region, as rampant mining and deforestation by the Chinese since the invasion has made the area susceptible to such natural disasters. Hopes that the Chinese government will recognise the effects of their projects on Tibet's natural environment were also expressed.
The Kashag organised a special prayer session to take place early this morning at the Tsuglagkhang Complex in Dharamshala, in memory of those whose lives were lost and also to pray for the recovery of those injured, both physically and psychologically.

Dhasa: The second ETC Organizing Committee is launching the European Chitue (MP) Initiative. This is an initiative to engage in a pre-election search for eligible candidates to run for office in the upcoming Tibetan Parliamentary preliminary elections in October 2010, and the final elections in March 2011.
The role of the next parliamentary representatives from Europe is of tremendous importance, as the number of Tibetans living in Europe is on the rise. According to the Tibetan Charter-in-exile, Tibetans living in Europe can elect two representatives.
"I believe that it is important that individuals committed to the Tibetan issue, combined with a good understanding of the European system, represent Tibetans living in Europe," said Thupten Gyatso, Chairperson of the ETC committee, which started this initiative. However, during the last general elections to the Tibetan Parliament-in-exile, only 36 per cent of the registered voters, or around 800 people out of 2224 registered voters, elected the two deputies from Europe.
"This is very disheartening. A democracy is only as strong as the people who participate in the process," Mr. Gyatso pointed out. "While we expect the Central Tibetan Administration to find a solution to one of the hardest problems, we also need to put in effort from our part as individual Tibetans. As the oppression in Tibet continues, and there is no immediate breakthrough in the dialogue with the Chinese government, it is imperative that Tibetans use the democratic system to put forward our best candidates. This will improve our democracy and add strength to our common cause."
Tibetans living in Europe can visit the ETC website (http://europetibetancongress.wordpress.com/) and nominate their candidates, who will be listed as nominations are sent in. The criteria for candidates are that nominee be over 25 years old, have current residency in Europe, and holds a green book. The ETC believes more information and transparency will improve the democratic process, and was inspired by the Kalon Tripa initiative launched by Mr. Thubten Samdup.

Seattle: Seattle's 15th Annual Tibetan Festival, Tibet Fest, scheduled to take place from 28th-29th August, will be dedicated to the victims of the Kyigudo earthquake that shook the Tibetan region in April this year.
The Tibetan Association of Washington, who are organising the event, seeks to help young Tibetans establish stronger ties with their cultural heritage through song, dance and folk tales, whilst residing in their new communities.
The two-day event will feature a performance from Tibet's best known R&B singer, Phurbu T Namgral, along with traditional Tibetan performers, arts, handicrafts and foods. Expert speakers on Tibet will give talks, and a series of workshops will run throughout the festival.