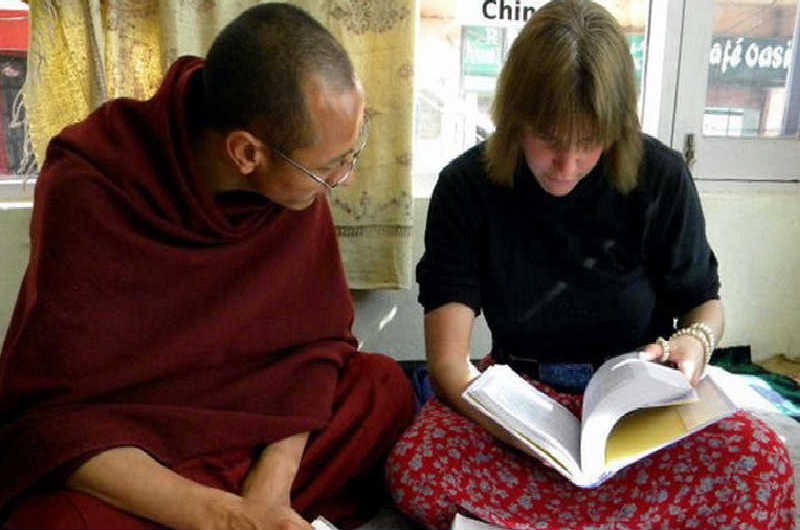 Dharamshala: - The sad truth today is that many people around the world are unaware of the Tibetan issue or of the plight of Tibetan refugees fleeing Chinese torture. Despite campaigns in many countries aimed at raising awareness, not enough is being done to inform people. I spoke to writer and Tibet Exile Project founder Tammy Winand this week about her experiences with the exile community in Dharamsala and the Tibetan cause, and we discussed what more could be done.

It is surprising in other countries to see just how many people are curious about Tibet, and how little they seem to know. From Tammy's experience in the United States, she says that "around 90% of people had no idea that there even existed an ‘exile-community'," and that many people were blown away to hear some of the harrowing tales of Tibetan refugees.

"Many people would just be like ‘wow, she's hanging out and having tea with someone who was tortured for thirteen years', they were so blown away, they just don't know," she explained, adding that her main goal now is to spark an interest in Tibetan culture itself, so that people will be encouraged to find out more on their own.

Everyday Exile Project is a website set up by Tammy as a platform for Tibetans in exile to share their stories. Here in Dharamshala, Tammy is involved in conversation classes at the Guchusum Movement of Tibet for former Tibetan political prisoners, and says that many in the centre have permanent disabilities as a result of Chinese beatings and torture, suffering from physical mutilation and badly healed broken bones as well as other conditions such as memory and hearing loss, usually caused by beatings to the head.

Another condition that many of the refugees suffer from is post-traumatic stress disorder (PTSD). In our interview, Tammy recalled a heart-wrenching afternoon spent with a Tibetan friend that left her in tears. During a conversation the young man seemed to drift away in his mind and began staring at his scarred wrists, reliving the horror of the handcuffs that inflicted the injuries and the torture he suffered for thirteen years in Chinese custody. As his fingers ran over the damaged tissue he looked up at Tammy and asked, "What is the word for this?" When she gave him the English word he replied with "yes, scars. This is what the Chinese did", and began telling the haunting story behind his wounds.

His experiences and the torture he suffered at the hands of the Chinese must have been traumatic to recount, but in the end it was Tammy who was brought to tears. "It's so incredible that after all he'd been through, when I started crying all he kept saying was, ‘are you okay? Do you need anything?' Before I knew it he was offering me cookies, and I just thought, ‘you're the one who has been through all of this, and yet you're the one comforting me.' It was amazing."

There is an aspect of Tibetan culture that hinders the Tibetan cause: humility. The Tibetan people are so humble and giving that they hesitate to stand up and share their story with others. People are reluctant to speak out and put their voice above the others in their community. What they don't realise is that this is the only way to make their voices heard by the international public, who still remains largely unaware of the situation in Tibet after all these years.

Tammy, like many others who have been fortunate enough to have contact with Tibetan people, has been swept away by their warm and giving nature, and asserts that "It's really moving to know that after everything they've lost they still haven't lost their humanity. That's why it's so important for their culture to be preserved".

The trouble is that people don't know about it and they want to know, but they don't know where to look. They're curious about Tibet, but they know nothing about the situation. Many people aren't aware of the Chinese invasion, and they have never met anyone from Tibet to explain it to them. This is something that needs to be changed, and everybody can help in the education process. Social networking websites such as Facebook, Myspace, Twitter, or blogs where people write down their thoughts are also useful, but so far not enough Tibetan people are using the internet to get their message to the world.

At places like Guchusum and the Lha organisation in Mcleod Ganj, people are being taught how to use these forms of media to their full advantage. Volunteers from all over the world are helping to show Tibetans how to best use the internet to educate foreigners about the situation in Tibet. Some volunteers come for a weekend; some for longer. The important thing is just to help, however the Tibetan people also need to help themselves. Explains Tammy: "They're always saying they're so grateful for what I'm doing for the community and I'm like, ‘don't you realise you can do that? You can reach 2000 people."

"The longer I'm here, the less I know. It's like I tell people all the time, there are as many answers as there are Tibetans who have come here from Tibet," she continues. For every Tibetan living in exile, there is a story to be told. Let's try to make them all heard.

The Lha and the Guchusum organisations are always welcoming new volunteers. One potential project in need of some attention is the suggestion of a ‘Guchusum group blog', requiring volunteers with computer knowledge to help with the blog's creation and maintenance. Tammy is also currently accepting sponsorship on Facebook and donations are more than welcome on the Everyday Exile Project website: http://everydayexile.blogspot.com/.