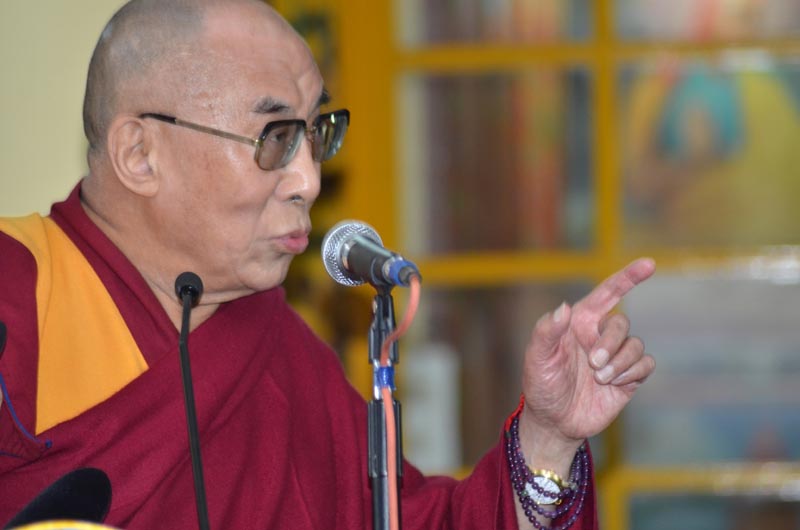 Dharamshala: - "Bear in mind that, apart from the reincarnation recognized through such legitimate methods, no recognition or acceptance should be given to a candidate chosen for political ends by anyone, including those in the People's Republic of China." - His Holiness the Dalai Lama of Tibet, 24 September 2011.

His Holiness recently made a lengthy statement on the issue of his reincarnation and categorically clarified his stand on the future of the Dalai Lama institution. His statement was timely, as the matter was scheduled to be discussed at the eleventh Tibetan Religious Conclave in Dharamshala. His Holiness made a declaration on the tradition of reincarnation in Tibetan Buddhism which gave a clear understanding about the concept of Tulku recognition.

As expected, Xinhua News Agency, the mouthpiece of the Chinese communist regime, responded with their rhetorical piece ‘Why the Dalai Lama Worries about Rebirth', which asserted the Chinese government's role in approving all Dalai Lamas since 1653.

China's response deliberately neglected the crux of the issue. His Holiness explained that only one Dalai Lama has been approved by using the Golden Urn, at the behest of Manchu officials after the Tibet-Gorkha Conflict of 1791-1793. Except for the eleventh and twelfth Dalai Lamas, all other predecessors, including the incumbent Dalai Lama, were recognized and selected through traditional Buddhist customs which had nothing to do with China.

On 26 September 2011, Chinese foreign ministry spokesperson Hong Lei responded mendaciously to a query during a press briefing, saying, "The title of the Dalai Lama is
illegal if not conferred by the central government," and warned that His Holiness' actions have caused severe damage to the normal order of Tibetan Buddhism.

This statement was a horrendously misleading, idiotic and absurd example of China promoting its illegitimate interference in the recognition of the Dalai Lama, and presumably it will make it the laughing stock of the whole world.

In September 2007, China formulated a law on recognizing and controlling Lamas' reincarnations. 'Order Number Five' is believed to have been implemented this year. Earlier, China played a duplicitous role in the current Panchen Lama's selection, whose predecessor died mysteriously in 1989. Since then, the Chinese Government has intruded into the affairs of Tibetan Buddhism by focusing on the recognition of Tibetan Lamas, especially the Dalai Lama.

The question remains whether China really has the authority to choose the next Dalai Lama. Forget about their tradition of ‘heaven's mandate'. Do they have the mandate of His Holiness the Dalai Lama, whom they consistently demonize? Do they have any historical basis for their claim of authority over the recognition of the Dalai Lama? And do they have the confidence of the Tibetan people and other Buddhists around world - to whom His Holiness has passed the right to decide whether the institution of Dalai Lama should continue?

China must withdraw its erroneous claim and abandon its arrogance and political manipulation of religious matters. It must understand that not all ends can be achieved by force. Recognizing and selecting Tibetan Lamas, especially the Dalai Lama, is not China's business. It is not equivalent to the selection of Chinese Politburo members or political leaders such as Mao, Deng, Jiang, Hu, Xi et al.

Deng Xiaoping, the grand old man of China, gave the sacred advice to "seek truth from facts". The Chinese government has forgotten his words, and Deng Xiaoping himself failed to keep to his word. It may be that Chairman Mao overshadowed Deng's rhetoric, as Mao, the great helmsman of China, had superior influence.

Mao's doctrine of "telling a lie thousand times to make it a truth" spread widely across China. If China ever felt indebted to Deng, who opened China to the outside world with his liberalization policy, it would presumably face the dilemma of choosing whose advice to follow - Deng's or Mao's. Modern China faces serious problems in recognizing what ‘truth' really means.

The Dalai Lama: Legitimacy in Selecting His Reincarnation

His Holiness the 14th Dalai Lama, believed to be the manifestation of Chenresig (Avalokiteshvara), the lord of compassion, was until recently both the spiritual and temporal leader of the Tibetan people. He devolved his political leadership to an elected government in early 2011.

The institution of Dalai Lama goes back hundreds of years, to the birth of the first Dalai Lama in 1391 AD. It is one of the oldest Tibetan Buddhist institutions to perform the selection process of reincarnation.

Bizarrely, the Chinese foreign ministry says on its official website that, "The Qing emperor granted him the honorific title of ‘Dalai Lama, overseer of the Buddhist faith on earth under the great, benevolent, self-subsisting Buddha of the western paradise.' The title Dalai Lama was thus established and is still maintained today."

However, it is clear that Altan Khan, on converting to Buddhism, conferred on Sonam Gyatso the title of ‘Dalai' and named him the Dalai Lama. The title signifies ‘universal, great, wide expanse like the ocean', or ‘ocean-like wisdom'.

In his recent memorandum, His Holiness  stressed that, "The person who reincarnates has sole legitimate authority over where and how he or she takes rebirth and how that reincarnation is to be recognized. It is a reality that no one else can force the person concerned, or manipulate him or her."

During the eleventh religious conclave, His Holiness explicitly rejected China's ploy, stating, "My reincarnation is to be decided by myself - nobody has the right to decide about that."

However, Chinese foreign ministry spokesman Hong Lei stated in a briefing, "There has never been a case of a previous Dalai determining the next Dalai." Even Padma Choling, chairman of the Tibet Autonomous Region, contradicted His Holiness, saying, "There have been 14 Dalai Lamas. It is unreasonable for him to do whatever he wants [about reincarnation]. There's no way for him to do so...What he said does not count,"

If His Holiness' s statement on his own reincarnation "does not count", must we believe the Chinese communist regime? Pema Choling implies the Dalai Lama has no authority in the Dalai Lama selection process. If this is the case, one must remember a comment made by Mao to the Dalai Lama that "religion is poison".

Apparently, China has forgotten its role in destroying more than 6,000 Tibetan monasteries, and its traditional hostility towards Tibetan Lamas. It labeled all reincarnated monks as one of the ‘Four Olds', and enacted on them severe punishment, torture, murder and the ‘struggle session' (tham zing). How can China claim any morality in choosing Tibetan Lamas, when China itself has offended against them?

Since early 2000, His Holiness has made several hints about his reincarnation that have annoyed China, which plans to choose its own Dalai Lama. His Holiness said in an interview, "If I die as a refugee and the Tibetan situation remains like this, then, logically, my reincarnation will appear in a free country, because the very purpose of reincarnation is to carry on the work which began in my previous life."

Bodhisattvas are born to help sentient beings. His Holiness, the avatar of Lord Chenrezig, is one of the bodhisattvas born to help the Tibetan people. Whilst Tibet has suffered for more than 60 years, he has taken complete responsibility for leading the Tibetan struggle - by virtue of having been recognized as Tibet's temporal and spiritual leader.

Since bodhisattvas are reborn to complete unfinished missions, the Dalai Lama foresees that he will be reincarnated in a free country, where he is able to continue his own missions. His Holiness has not ruled out being born again but says that, if the Tibetan people feel the need to end the Dalai Lama institution, then it shall cease. However, he would still reincarnate in other forms, to meet the needs of sentient beings.

It is vital to understand why China is so preoccupied with appointing its own Dalai Lama, despite His Holiness' wishes. My understanding is that China dreams of politicizing the Dalai Lama, in order to maintain the communist regime's stability.

Tibet, over the past decades, has become a serious threat to China's stability and international prestige. Although Tibetans constitute just one of 55 minority ethnic groups in China, the Tibet issue remains the most troublesome challenge to China's image.

Within Tibet, many young Tibetans who have never even seen His Holiness show tremendous reverence to him and are even prepared to sacrifice their lives in the struggle for his return to Tibet. His Holiness also has huge global popularity, and travels all over the world to spread positive values and moral ethics. In late 1979, 20 years after the Chinese occupation, an exile delegation visited Tibet on a fact-finding mission, and China realized His Holiness still maintained an overwhelming influence there. Since then, China has been vigilant in condemning His Holiness whenever opportunities avail.

China realized it needed to curb His Holiness' activities and maintain strong opposition to him, both inside Tibet and elsewhere. In Tibet, His Holiness' photo is banned from display. In 2008, Zhang Qingli, former party chief of Tibet said, "We are now engaged in a fierce blood-and-fire battle with the Dalai clique - a life-and-death battle between us and the enemy."

If the ‘Dalai Clique' is an enemy of China, then His Holiness should indeed be considered to be its leader. Zhang Qingli called Holiness "a secessionist chief who fools simple believers under the guise of religion." If this is the case, why is China so passionate about choosing the next Dalai Lama, whom it would consider to be an enemy?

China hates His Holiness and has called him various derogatory names, such as ‘wolf in a monk's robe', ‘monster with a human face but the heart of a beast' and ‘splittist'. It has even spoken of ‘chopping off a serpent's head', implying His Holiness is a serpent.

Despite this, His Holiness' magnanimity still extends to China, where he gains more and more followers. He has even humorously thanked the Chinese government for increasing his popularity via their vacuous acts of condemnation. China is now strenuously playing the ‘religious card' and attempting to enroll Tibetan lamas who are not loyal to His Holiness.

Moves such as rejecting His Holiness' nomination of the young boy Gedun Chokyi Nyima to be Panchen Lama, and instead making it own choice - Gyaltsen Norbu - bring no goodwill to China. The majority of Tibetans do not trust Gyaltsen Norbu.

Author Tim Johnson has said, "The truth is that the ruling party wants new kinds of Tibetan lamas, not loyal to the Dalai Lama. The [communist] Party wants to sever ties between the lamas of the Tibetan plateau and the Dalai Lama. It is not new - Beijing does the same with the Vatican and Catholic bishops in their territory."

His Holiness is the figurehead of the Tibetan struggle and the ultimate voice of Tibet. China believes that struggle will dissipate once His Holiness passes away. China is not simply waiting for him to die, but pushing hard to control and recognize the new Dalai Lama, even though it has accused the present Dalai Lama of being unpatriotic to the motherland.

The most serious issue is the real intention behind the Chinese government's desire to choose the next Dalai Lama. Is it for the sake of religion or politics? If China succeeds, will it help silence the Tibetan movement? Irrespective of China's regulations on religious affairs and the administration of the reincarnation of living Buddhas, does the atheistic regime really understand the true meaning of reincarnation? And, if China established its own rules on the recognition of lamas, what would be the implications for Himalayan Buddhists outside of Chinese jurisdiction?