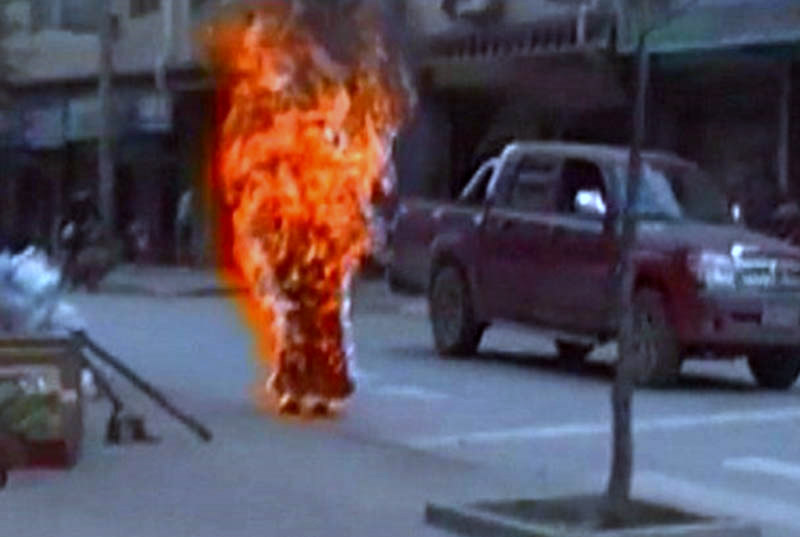 London, UK: - Since March, eleven Tibetans within Tibet, including monks, former monks and two nuns, have set themselves on fire. At least six of them have died in the act. Tibetan protests have been taking place over the course of six decades of cultural genocide inflicted by the Chinese state.

China has never properly considered the issues of religious freedom and human rights, despite the cries of Tibetans within Tibet and across the globe.

This year, Tibetans within Tibet have come out again in protest. A human mala, or rosary, of Tibetan monks and nuns have self-immolated in order to grab international attention.

This was the only way left for them to express the reality of their feelings and situation.

Protests have taken place worldwide since the ‘flame of the souls' was lit in Tibet.

In London, UK, hundreds of people have participated in demonstrations to express sympathy for those Tibetans who have self-immolated, as well as all those others who suffer as a result of brutal Chinese policies.

The protests, which have been running for over a week, have been held mainly at Downing Street - the residence of British Prime Minister David Cameron - and outside the Chinese Embassy.

The Tibetan community, alongside supporters from Students for a Free Tibet, have played a big role in organising these activities and providing information to the media and general public. They have suggested that protests should be held on Wednesdays.

Lhakar, or ‘White Wednesday', is His Holiness the Dalai Lama's ‘soul day'. It is also the name of a non-violent people's movement that has emerged in Tibet. Each Wednesday, a growing number of Tibetans make a special effort to wear traditional clothes, speak Tibetan, eat in Tibetan restaurants and buy from Tibetan-owned businesses.

Some Tibetans in the UK, together with their supporters, have visited their local MPs to report on the situation in Tibet and to request that questions on the issue be raised in the British parliament.

It seems everybody is doing what they can, but Tibetans in the UK are concerned to know whether the self-immolations in Tibet will achieve anything, or possibly make things even worse.

The loss of each life is tragic and, as the Karmapa Lama said, "Tibetans are few in number, so every Tibetan life is of value to the cause of Tibet."

The deaths have caused a lot of grief to friends, family and Tibetans in general, but what has been the wider world's reaction?

BBC News has broadcast two news reports from Dharamsahla - most recently on November 19 - focusing on why these tragic events have occurred.

On November 17, it reported that the exiled chief abbot of Kirti monastery, who fled to exile in 1959, had said he received information about the situation at the monastery through underground channels.

"Chinese government policies are the cause of the immolations," he said, concluding that the Chinese authorities could put an end to the protests overnight, if they changed their approach.