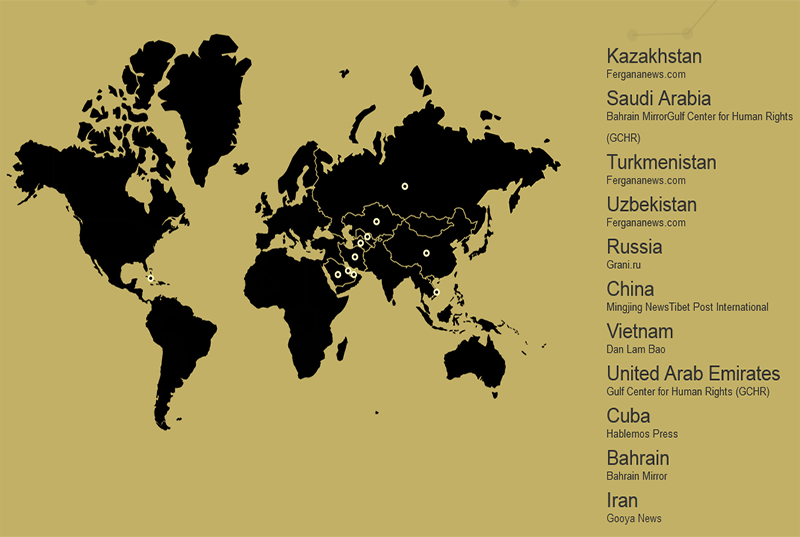 Dharamshala — Through Reporters Without Borders (RWB) during the past three decades, thousands of people around the world have dedicated their lives to the struggle for freedom, justice and equality and have served the world diligently since 1985. RWB, known as a great "Mediawatchdog," maintaining a strong voice for justice of expression, came into existence exactly 37 years after the declaration of the Universal Declaration of Human Rights.

We're proud that RWB is known as one of the greatest fighters of all time for freedom of expression around the world. Its not only actively involved in promoting and protecting human rights, freedom of expression and the safety of journalists, but it also has worked tirelessly to spread the word about freedom of press - including countless signed petitions, participation in protests, published books, submitted pictures and sent notes to show solidarity and to speak out as a voice for the voiceless to urge the repressive governments to release the imprisoned journalists, bloggers, writers and all other prisoners of conscience, and to repeal all laws that curtail human rights and freedom of press.

"If Reporters Without Borders is recognized and respected throughout the world, it's partly and above all because of your commitment and your tireless work in the field. You are at the heart of our organization and some of you have been there for many years."

When I saw the message from RWB, I was so proud and touched for what we have been working towards. Not because RWB is famous, but because we share those democratic values and principles as a very strong common bond. In the life of an individual, a generation seems quite a long time, but in the context of the greater press freedom cause, 30 years or so is not very long. I was a 9-year old Tibetan boy when I became a refugee in the same year that RWB was founded, in 1985.

After 30 years, it has now come to symbolise it's own dedication to defending and furthering press freedom as the essential corollary of freedom of expression worldwide. Our struggle for freedom of press can be as great as we want it to be since we believe in truth and justice. Non-violence will prevail if we believe in ourself and have the courage, the determination, the dedication, the competitive drive and if we are willing to sacrifice the little things like short-term interests and stand up for universal principles that the free world should uphold.

On behalf of all Tibetan people in Tibet who are still unable to express themselves freely without fear, TPI News would like to express our deepest appreciation to all people who have worked for the organisation- including its current and former members for their outstanding contribution in safeguarding and promoting freedom of information and press in many countries, including Tibet and China, specially standing up for universal principles.

On behalf of all those I rise today to honor one of the most prominent advocates of our time--Reporters Sans Frontiers (RSF) a France-based international non-profit, non-governmental organization that promotes and defends freedom of information and freedom of the press as it is celebrating its 30th anniversary, on May 3, World Press Freedom Day.

RSF is an international NGO with whom I have worked as a Tibetan Correspondent for the past nearly ten years. It is my pleasure to honor the international organization that promotes and defends freedom of information and freedom of the press and I wish RSF all the best and success in its future endeavors.

In 2014, Jigme Gyatso, a Buddhist monk from Tibet was selected among the "100 Information Heroes" of the RSF on the occasion of the World Press Freedom Day. Most recently, the RSF has selected The Tibet Post among the nine websites that are banned in 11 countries, including China, allowing people there to see them, which has been widely covered in international media, including BBC- hailed a great win over censorship and propaganda and good news for people who hate bad news. This was among the few of most recent victories of the last 30 years.

Further, the RSF has been a leading voice throughout the world for human rights and freedom of speech, including it's tireless efforts in those countries where freedom of speech is systematically denied and severely violated. Tibet is one of the few countries where not only religious expression is suppressed, but those who cross political and social red lines surrounding faith are systematically tortured and detained.

There have been arrests of those involved in writing books about Tibet, posted content relating to Tibet or spoke out in other's defense. In addition, most of the Tibetan independent website blogs have been closed down and intellectuals cannot report freely on the situation inside Tibet.

China's constitution provides for freedom of religious belief, but the government actively restricts any religious expression that could potentially undermine its authority. Still no independent news or information can be reported by the print media, broadcast media or new media in Chinese-controlled Tibet without fear. News independent of Chinese controlled media still cannot be reported within Tibet. Outside the country, especially in India, where hundreds of thousands of Tibetans have found refugee, independent news is flourishing.

However, China's international image has been greatly tarnished not only from their repressive policies against Tibetan and Chinese people, but also, as RSF has said several times, 'the authorities in Beijing also tightened the grip, isolating Tibet even more from the outside world.'

Tibet today is denied basic human rights, freedom of expression, freedom of assembly and the right to peaceful protest against the Chinese regime. There is daily fear of arbitrary detention or torture. As Tibetans, we must remind ourselves to honor those who have sacrificed their lives for the just cause of human rights, including freedom of speech.

RSF has been a tenacious advocate for checks and balances to prevent censorship by peerless, dictators and authoritarians. RSF is a familiar face on the world stage, an advocate who has shown the world how to strengthen one's willpower and self discipline, like during the 2008 Olympics in Beijing. I am hopeful that RSF will remain close at hand and active in the fight for basic democratic values, including freedom of press. I urge you all to join me in wishing RSF all the best, and to congratulate RSF as it celebrates 30 years of great adventures.

Without the tireless efforts of all the RSF members that make up the global free press movement, we would not be able to celebrate this year's World Press Freedom Day differently. Please take a moment to send a message of support to the RSF you stand with until all those suppressed people are free. The struggle will continue. We must defend this most fundamental right: Freedom of Speech.."